Well this is it folks.  By Saturday afternoon we will know the composition of the 53 man roster that will compete for the Lombardi Trophy in February of 2010.  Some roster spots will be won today and others will be lost;  the battle at cornerback, running back, offensive line, and wide reciever is particularly heated and their could be some surprises made by Mike Tomlin and company.  The final three quarters of the Carolina game this evening could quiet possibly be the most competitive football we have seen this preseason since many of these men will be attempting to earn a living doing what they love at the highest level.

Just think Steeler Nation: this time next week we will be preparing for the Season Opener at Heinz Field against the Tennesee Titans.  I just got really excited typing that last sentence.

Steeler Nation are you ready for some football? 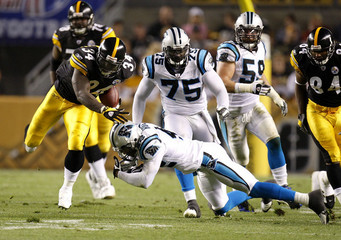