Share All sharing options for: Steelers Hope To Find Similar Offensive Success As They Did Against Chargers Last Year (Part 1)

When the Steelers and the Chargers square off at Heinz Field Sunday night, it will be the third meeting between the two teams in the past fourteen games. All three will have been at Heinz Field. And hopefully, just hopefully, the Steelers will play one of their better offensive games the past season and a half on Sunday like they did the previous two times the two teams tangled. 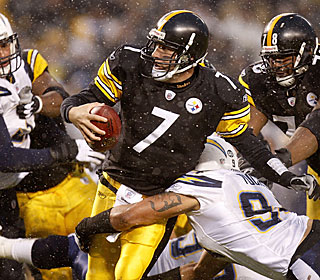 It was Week 11 when San Diego and Pittsburgh met for the first time last season.  The Steelers won 11-10 in a nail biter than featured no offensive touchdowns by the Steelers, merely three Jeff Reed field goals and a safety by James Harrison. Some might scoff at the notion that Pittsburgh played a very good offensive game that day - how can I say that when they failed to get in to the endzone even once?

Well, first of all, remember the context of when that game happened in the season and what the Steelers had done in the first ten weeks. The Steelers were 6-3 heading in to the game, but had lost two of their last three games to the Giants and Colts due to costly turnovers by BIg Ben and poor pass protection that probably played a role in some of his unfavorable decision making. Remember also that Roetlisberger played just one half - and an abysmally poor one at that - in the Steelers victory against Washington that was sandwiched between the two losses.

So, even though Roethlisberger and the offense didn't finish off a single touchdown during the Week 11 regular season win over San Diego, it was an extremely welcome sight to see how he performed. Let's remind ourselves of his performance...

Nothing spectacular, by any means. But it was important to see Roethlisberger protect the football...i.e. not throw bone-headed picks in Steelers territory that gift wrapped cheap points for offenses that were otherwise struggling to muster much against our defense. 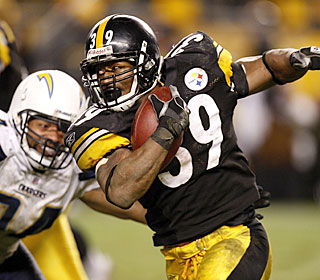 Big Ben was sacked four times that day, but two of them I believe were sacks where Ben held on to the ball way too long, perhaps in an attempt to make sure he didn't throw any costly interceptions. The offensive line played probably their best game of the year since the Jacksonville game. Willie Parker ran for 115 yards on 25 carries. The 115 yards were his third highest regular season total last year, and the 25 carries equaled the second most attempts he had in a regular season game last year. The Steelers offensive line didn't dominate, but they more than held their own in both departments - pass protection and run blocking. The Steelers finished the contest with an impressive 410 yards of offense.

So how did they only put up 9 offensive points? Well, it never helps to get shut down at the goal line on 4th down, which happened when Mewelde Moore failed to crack the plane in the 2nd quarter. The Steelers were also forced to kick a field goal at the end of the 1st half as they were knocking on the door at the San Diego 3 yard line. Another huge problem that day was penalties. Pittsburgh was penalized 13 times for 115 yards. Pittsburgh had a drive early in the 2nd half stall because of penalties. They were forced to punt from the Chargers 38 yard line rather than marching on for another field goal attempt or even 6 points. They then had a touchdown wiped off the board (a 4 yard run by FWP) due to offensive holding. That drive resulted in 3 points too. You get the picture - the scoreboard didn't accurately reflect how the Steelers dominated most of the game, or how the offense was doing a very good job for the most part possessing and moving the ball (36:31 to 23:29 TOP advantage).

In my next post, I'll take a look at the Divisional Round victory by the Steelers over the Chargers in last year's playoffs, as well as how the Chargers defense looks this year and how I believe we matchup fairly well against them. If you aren't convinced that the offense played well in the two teams' first meeting last year, surely you'll agree that the offense finally put a complete game together when they needed it most.