IX- The most important news of the day is that tonight is the premier of the "America's Game" special on the 2008 Super Bowl XLIII champion Pittsburgh Steelers.  The other five episodes of the "America's Game" series have all been must watch T.V. for me whenever they are on the NFL Network, and I would expect the same quality from NFL Films for this episode.  It premiers at 9pm eastern time and features Mike Tomlin, Ben Roethlisberger, Troy Polamalu, and is narrated by Jon Hamm of AMC's Mad Men. 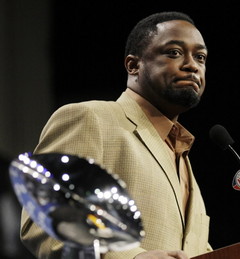 X-Lamar Woodley:  Defensive Player of the Year.  It has a nice ring to it and I have heard crazier things and Brad Gagnon over at "The Score.com" thinks it's a possibility in his 2009 NFL preview.  I wonder when the last time two players from the same team won back to back defensive player of the year honors.  I could probably easily track it down but I am much too lazy.  In addition to his NFL preview he has a team by team preview including a solid one about the Pittsburgh Steelers.

XIII- An open letter to Bruce Arians from the folks over at Steelers Depot.

XLIV-Ramon Foster overcame tall odds to make the 53 man roster of the Pittsburgh Steelers, and has received high praise from coaches, the front office, and even some of the players he was battling in the trenches with like Darnell Stapleton.  The most interesting tidbit of knowledge in the article is that Ramon has three brothers that are professional athletes including one that was just cut by the St. Louis Rams on the same day that Ramon found out he had made the Steelers roster.

XL-In preparation for the extravaganza that is the Steelers vs Titans tomorrow, Steelers Today has explained why they feel the terrible towel is so important to Steelers fans and why other fans should at least respect the cloth.

XLIII-The guys from One for the Other Thumb and Pittsburgh Sports and Mini Ponnies have been doing a unamed pre-game show for a while and they threw one together for the upcoming week one match-up which you can view below: