With Bill Cowher possibly returning to football this year rumors are circulating that current Steelers G.M. Kevin Colbert could possibly follow Cowher to his new destination.  The other high ranking Steelers exectutive that is frequently forgotten about when talking about the Steelers and their success over the last decade is Omar Khan, who is contract and salary cap specialist.  The bad news for the Steelers is that Khan might not be waiting for Cowher to get back into coaching as he is interviewing this week for the vacant position with the Seattle Seahawks.   Myself included I'm sure that most Steelers fans couldn't pick out a Khan in a line-up, so below is a picture of Khan and Steelers running back Mewelde Moore. 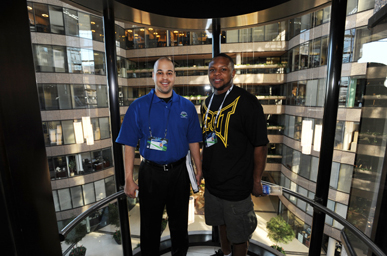 Congratulations to Mike Wallace who was named Pepsi's NFL Rookie Of The Week, for the third time this season for his performance in week 17.  Wallace's three Rookie of the Week awards throughout the season were only topped by Bronco's running back Knowshon Moreno who won the award four times this season.  Perhaps the most amazing part of Wallace winning the award three different times, is that he was the only non-first round draft pick to win the award in the 2009 season.  Wallace, drafted in the third round, has performed at a much higher level than really anyone could of expected but I guess his three Pepsi NFL Rookie of the Week awards weren't enough to get him nominated for the Pepsi NFL Rookie of the Year, as five players were selected, but Mike Wallace wasn't included.

Wow, that was a great wild-card weekend of football, particularly the final game of the weekend between the Packers and Cardinals that went to overtime and established playoff records for scoring and was one of the most entertaining playoff games in league history.  In the first game of the day on Sunday the Ravens had the perfect game plan to beat the patriots and if they can continue to put together a rushing attack like they did on Sunday regardless of how weak their secondary is they have a shot at being competitive with the Colts and the Chargers.  For some additional wild-card talk and other football news check out Peter Kings' regular Monday Morning QB article.

When  you think about a locker room disruption in the 2009 NFL season many will think about the controversy between Hines Ward and Big Ben prior to the game at Baltimore that Ben Roethlisberger eventually sat out.  But if you would like to see an real locker room disruption you should be sure check out the comments from Clinton Portis about Redskins Quarterback Jason Campbell, and Campbell's rebuttal to Portis.  Mike Shannahan is walking into an organization with no structure and no accountability;  it will be interesting to see what happens to the Washington Redskins over the next few seasons.

Stadium Journey is a website devoted to providing reviews and editorial content on each stadium, arena, and field in America.  Recently the folks at Stadium Journey were in attendance of a game at Heinz field and gave the stadium a pretty glowing review.   I actually attended my first game this season at Heinz and had great seats three rows up from the twenty yard line thanks to a few friends.  I had been to a few away Steelers games and I had previously been to Three Rivers but the passion and excitement of Heinz Field is unmatched in terms of any stadium I have attended.

I'm not even going to try to summarize this article on the charitable contributions of Charlie Batch, but rather point you in the direction to the Pittsburgh Post Gazette article on Batch and the tragedy in his life that helped sparked his professional career and his spirit for philanthropy.  Thanks to newer BTSC reader and contributor "diggetydank." for bringing this well written and inspirational article to our attention.