IX-After the 2009 NFL draft when A.Q. Shipley was picked by the Pittsburgh Steelers their were rumors that a few members of BTSC actually went out to A.Q. Shipley's home and helped him create his bust for his pending election to the Pro-Football Hall of Fame in Canton.  It looks like those members can go ahead and pack up the bust and mail it to Lincoln Financial Field, because Shipley has signed himself a three year contract to play on the other side of the state.  I bid the man a farewell, but Philadelphia seems like a better fit for a cabbage patch doll anyways. 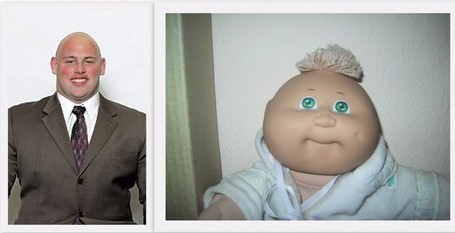 X-Last season the Pittsburgh Steelers made a pretty solid signing from the CFL with return specialist Stefan Logan, who set the Steelers single season record for return yards. Yesterday the Steelers made an attempt to make another splash by signing linebacker Derrick Doggett who was a special teams demon for the Winnipeg Blue Bombers of the CFL. Last season Doggett led the entire CFL with a 28 special teams tackles and added nine defensive tackles, a forced fumble and an interception. Doggett was also a standout in college for Oregon State, but looking at his measurables he is extremely undersized by NFL standards at only 6'3 and 210 pounds. At that size in the NFL it would seem Doggett will either be restricted to special teams, convert to play safety, or have to bulk up considerably as his size compares more favorably to Ike Taylor and Troy Polamalu than it does to James Farrior or Lawrence Timmons.  In fact Doggett is almost the exact same size as his former Oregon State teammate, and current Steelers teammate Keenan Lewis.

XIII-The newest video from the crew over at Benstonium is by far their best work.

XIV-Among the candidates for the head coaching vacancy in Buffalo is former Steelers offensive line coach and assistant Head Coach, Russ Grimm.  Grimm has consistently been in the mix for head coaching vacancies the last few seasons but has come away empty handed.  Former Steelers coach Bill Cowher, Vikings cordinator Leslie Frazier, and both Marty and Brian Schottenheimer have been linked to the Bills vacancy.  Right now the Bills job is the only head coaching job available although rumors are circulating that the disaster that is the Oakland Raiders could be soon looking for their third coach in as many years.

XLIII-For the second season in a row Troy Polamalu will be the focus point of a Super Bowl commercial, this time he will be stumping for Tru-TV, the cable channel formerly known as Court TV. Polamalu will be part of a commercial advertising Tru-TV's brand new television show, "NFL Full Contact", which Tru-TV claims is a behind the scenes look at the NFL. The show premiers the day after the Super Bowl, February 8th at 10pm.