* First of all, congratulations to the winner of this weekend's Bill Cowher signed Terrible Towel. I'll err on the side of liberty and not disclose his name, but you were the only entrant to pick all four games correctly - not having to deal with tiebreakers really was quite a nice surprise, frankly. Anyway, nice job on the picks. 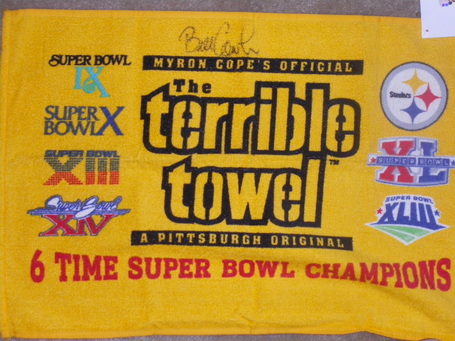 * As for the weekend's games. For the second week in a row in this year's playoffs - three non-competitive blowouts to start the weekend leading up to a much more tightly contested and interesting battle to conclude the week's slate of games. To get things started, Drew Brees and the New Orleans Saints dusted the Arizona Cardinals in front of a delirious crowd at the Super Dome. Though that game was decided quite early in the 3rd quarter when Reggie Bush took a punt return to the house, it was still at least an entertaining ballgame in terms of sheer fireworks being put on display by all three units of the Saints team.

In the Saturday nightcap, Indianapolis handily dismissed the Ravens from this year's playoffs. Though one has to acknowledge the fact that Baltimore shot themselves in the foot on three distinct and profound occasions in the second half. Two of those three gaffes were on Ed Reed interceptions - the first when Ed Reed had the ball stripped away from him as he was returning an interception back deep in to Colts territory; the second coming on another Reed interception that he returned down to the Indy 2, only this one was negated by a pass interference call on Corey Ivy that didn't at all help Reed pick off the pass; and then finally, Ray Rice fumbled midway through the 4th quarter with the Ravens desperately needing a score to trim the lead to 7. Think you can overcome Peyton Manning with a hat trick of costly errors like that? Ha, I don't think so.

On Sunday morning, fans were treated to yet another blowout, as the Vikings dominated the visiting Dallas Cowboys. You know what happened - it's impossible to be an NFL fan without being bombarded with Brett Favre coverage after all. But a tip of the cap to the 40 year old, no doubt about it. By the way, anybody who thinks the Vikings were being 'classless' for 'running up the score' late in the contest - puhlease. This is playoff football. Period. Enough said really. One might wonder why Brad Childress would risk an injury to a guy like Favre, Peterson or Percy Harvin, but to think they are obligated to just roll over and keep the score respectable is incomprehensible to me. Anyway, three Tony Romo turnovers when the stakes were at their highest - nothing overly shocking there. I think the Cowboys actually match up fairly well with many of their primary adversaries in the NFC, but I wouldn't say that Minnesota's one of them. The stout rush defense of the Vikings neutralized the usually strong running game of Dallas, holding the trio of Felix Jones, Marion Barber and Tashard Choice to a mere 84 yards on 23 carries.

Finally, wow, how 'bout the New York Jets? Part of me really doesn't enjoy seeing them advance, but I must say, I'm a sucker for Rex Ryan and what he's brought to not only the Jets, but to the NFL as a vocal, charismatic coach that's totally unafraid to stick his neck out on the line for his players. I sure hope they've got one more W in them when they travel to Indy this coming weekend to take on the top seeded Colts.

* Does anybody really think Kurt Warner's going to leave $10 million on the table and walk away? I'd be quite surprised if he does retire, though it's plainly clear that part of him is not only aware, but a bit scared even of the big hits that await him while in the pocket.

* Love the move by Saints head coach Sean Payton to make Deuce McAlister an honorary guest captain and have him lead the team out on to the field last Saturday. Deuce was the heart and soul of that franchise for quite some time and only barely missed out on the team's peak years since Brees and Payton arrived in the Big Easy back in 2006.

* Bet you didn't know that the last time a team was the recipient of 5 straight missed FGs was in 2002. The New York Jets have matched that incredible record in this year's playoffs. They advanced in the Wild Card round thanks in part to two missed Shayne Graham FGs. (Graham is one of the most accurate kickers in NFL history, by the way). Then on Sunday, Nate Kaeding missed three attempts. Will that continue? Sheesh, history says no way. You never know though. Could it just be their year?

* So which is it? Does veteran quarterback play matter or has that theory been debunked in recent years, Heck, guys like Ben Roethlisberger, Joe Flacco, Matt Ryan and now Mark Sanchez have all led their team to the playoffs - and in the case of three of the four aforementioned signal caller, all the way to the conference title game in their first professional season. Those are compelling examples no doubt, but look at the other three quarterbacks still alive in this year's playoffs: Favre, Manning and Brees. Pretty much the creme de la creme right there, and all three have been stellar all year leading their respective teams to the best records in all of football.

I don't think there's a right answer. Columnists might want us to believe that this or that trend has undeniably taken hold in today's NFL, but it's never that black or white. I myself am still a believer that the team with the best quarterback is going to have the best chance to win each and every week. For that reason, I think it's very likely we see Indy in Miami for the Super Bowl (God, I hope I'm wrong). As for the NFC? Who knows. It should be one heckuva game.