Share All sharing options for: Open Letter to Bruce Arians

Congratulations on receiving confirmation that your contract through the 2010 season will be honored. As one in the minority who has defended you throughout Steeler Nation, I believe you deserved that vote of confidence. 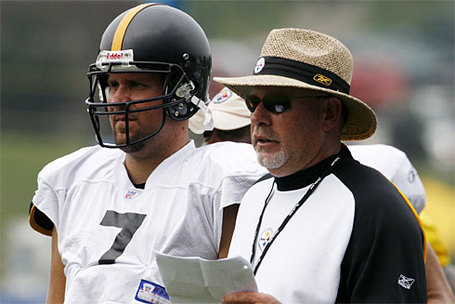 In case you haven't noticed, you do not have good chemistry with Steeler Nation. You probably don't care, but I'll tell you why anyway. Simply put, you are not a subscriber to Steeler Football, which has been a badge of honor in the Nation for as long as I can remember, the early '60s. Steeler Football traditionally has been John Henry Johnson breaking someone's jaw with a run or a block; Chuck Noll insisting that we "impose our will" on anyone standing in our way; Merril Hoge pounding his soul on Three Rivers carpet; guys like Barry Foster, Bam Morris and the marquis poster boy of Steeler Football, Jerome Bettis. People in Pittsburgh who work hard and eat lunch from a pail, people who would trade a $100 bottle of Dom Perignon straight up for a six-pack of Iron City, people who cannot help to fall in love with a guy named "the Bus," just have a hard time relating to your wide-open, often lunatic style.  You are a wine cooler in a case of Rolling Rock.

But that's OK.  In fact, in some ways, it is we who are a bit behind the times while you are trying to forge to the cutting edge.  I just looked up the NFL's team rushing yards for 2009.  I noticed that San Diego and Indianapolis, the two teams with the bye in the AFC, are ranked #31 and #32, the absolute bottom of the barrell, in both rushing yards and yards per attempt.  That cannot be random coincidence.  The NFL is constantly changing and those who don't change with it are left behind.

The bottom line is that every single skill position player in your offense had the best year of his career, and that alone merits you another year as our offensive coordinator.  Our quarterback was among the elite in the league with a 100 passer rating and became the first Steeler to ever shatter the 4,000-yard passing mark.  Hines was vintage Hines, and Tone not only crossed the 1,000-yard mark for the first time, he tacked on another 250.  Heath Miller also had the best year of his career, by far, and how you emerged both Rashard Mendenhall and Mike Wallace has really excited the entire Nation.  Yes, you do things that annoy us, and I'll get to those soon, but firing you now would be a classic case of throwing the baby out with the bath water, or throwing Angelina Jolie out of bed for eating crackers.

The truth is, and the Nation may find it hard to swallow, but you were not the reason we didn't make the playoffs this year.  The Steelers won the Super Bowl in 2008 with 1,000 fewer yards and 21 fewer points than you racked up in 2009.  The reasons we are sitting home right now are because we could not tackle kick returners and our defense made some alarming nosedives in many categories, namely third-down conversions and fourth-quarter collapses, but I digress. That's a subject for another day and a letter to another coach.

Back to eating crackers in bed, I have four requests that I implore you to consider.  While you are ahead of the power curve in many ways and truly represent modern NFL football, I humbly submit the following suggestions:

1)  On third down or fourth down, with one or two yards to gain, we must run the football.  When we bring in that empty set and the defense knows we're passing, four things can happen and three of them are bad.  An interception is the worst, a sack is almost as bad, and even an imcompletion means we have to either punt or turn the ball over.  Rashard is a big boy.  Give him the football.  If we can't gain a stinking yard we don't deserve to win, but my guess is we will.

2)  Give the defense a break.  Slinging it too much, even when it works and especially when it doesn't, keeps putting the defense back on the field.  They are a proud but aging unit that needs a 10-minute break now and then.  Use some clock.  Mix in some screen passes.  Mendy might be great with those.  Who knows, by the fourth quarter maybe our defense might not be so tired and might not keep collapsing.  Tone and Hines and young Wallace won't mind.  Ask them if they would rather have another Lombardi or better statistics?  They'll give you the right answer.

3)  We play in the AFC North.  We have no domes.  The weather is often bad, the wind is often blowing, precipitation is often falling and the field is often a mess.  Take note of that.  Design your game plan around an offense that can least be affected by the elements.  We have to run the ball when we have to run the ball, if that makes sense.  Make sure both your personnel and game plan are prepared to do that.

4)  Ben cannot be sacked another 50 times.  He is a walking time bomb ready to implode on any play.  There are a hundred million reasons why he needs to be protected.  Ever notice how Peyton's jersey doesn't need washed after playing in a mud bowl?  We need to treat our guy with the same respect.  Yes, he needs to make plays, and yes, part of his total effectiveness is improvising and making plays.  We need to allow for some of that, but not to the extent we currently allow.  You can't give a BB gun to your son and then let him run wild in the back yard without giving him some restrictions.  We need organized mayhem, if you'll pardon the oxymoron.  There's a fine line between letting Ben be Ben and letting Ben be General Custer.  Find it.

If you do these four things correctly, I believe the statistics you post will have greater meaning.  Instead of being the seventh ranked offense but 12th in scoring, indicating more yards and fewer points, we might increase our scoring output to match the yardage gained.  We might also improve our 21-ranking in red zone touchdown efficiency.  We will also help our defense so that together we can all eat.

Again, congratulations on wearing the black and gold another year.   I believe you deserve a chance to mesh your offensive prowess with the above governors to form a beautiful balance of creativity and methodical football.  I am also looking forward to a fresh offensive line coach who can help you do such.  Assuming you are big enough to listen to the above suggestions, you have my loyal support.