Share All sharing options for: 2010 Steelers Ladies Night Out

Tonight was the 2010 Steelers Ladies Night Out at Heinz Field, and I nobly sacrificed my Wednesday evening to bring you a full report of the happenings.  There's plenty of inside information after the jump: 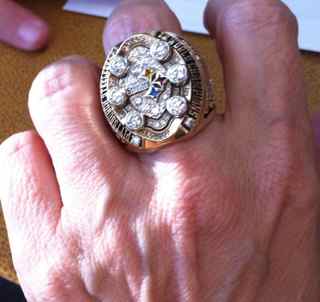 The event was limited to 400 people, and it was full.  Everyone that I talked to was at a Ladies Night Out for the first time, and some of them had come quite a way to be there.  (One lady from Ohio said that when people ask her why she is a Steelers fan, she says that it is because there are no professional teams in Ohio.  Burn...)  During the registration period, those of us who had already registered had the opportunity to try on the Marketing Director's Super Bowl ring, and here it is: They then fed us a really nice dinner.  I'm always impressed when someone does a good job cooking for 400 people.  One of the women at my table had brought her Atwaan Randle El bobblehead, and here it is, along with the original: 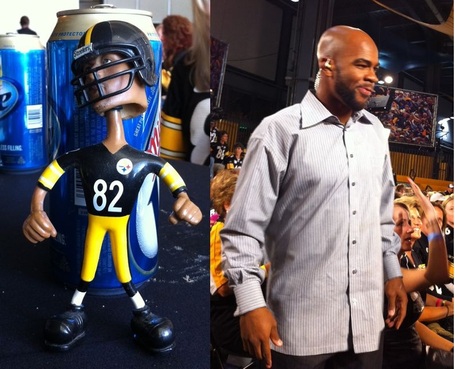 After dinner we had two speakers, Brett Keisel and Maurkice Pouncey.  Brett spoke first, and they played the video footage of his interception to bring him in, which got everyone pumped up.  He was pretty pumped up over it as well - I suppose when you play a position that is largely anonymous unless you are screwing up, it is pretty exciting to be the center of attention in a good way.

Brett grew up in Wyoming, on a cattle ranch near Greybull.  This presumably sounds pretty romantic to those who have never lived in Wyoming (where summer comes on July 13th or so, if you're lucky, and is gone by August) or been part of the backbreaking work of ranching.  Someone once wrote an article about him that indicated that he rode a grizzly bear to school, and that he had to cross the Grand Tetons to get there.  Brett says it wasn't quite like that.

He got an enthusiastic response when he told us that he's known his wife since fourth grade.  They have a 2 1/2 year old, and are expecting their second child in November.  He indicates that his wife is very supportive of him and is always the first to tell him when he missed a play or otherwise screwed up. 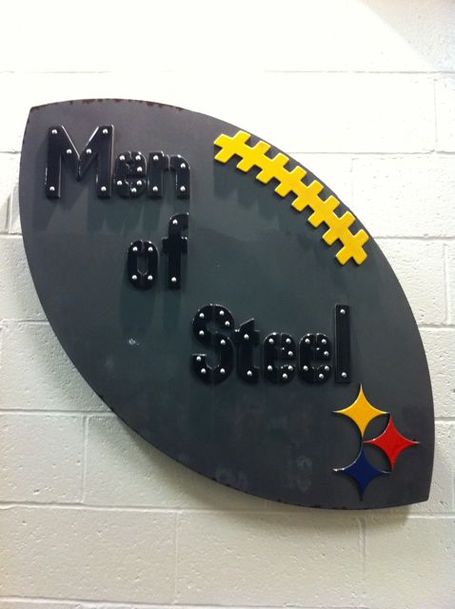 He loves basketball, and played both football and basketball in high school.  He even considered a couple of schools that would let him play both, but obviously eventually opted to concentrate on football at BYU.  He began his college career as a tight end, but was quickly moved to defense.  He seems to feel that the coaches are missing a good bet by not giving him the ball more often. He's hoping for another touchdown on Sunday.

Brett went on to describe life with the Steelers and his feelings about the club.  He let us in on a few secrets.  The best one is that on Saturdays the rookies have to bring them breakfast.  I loved hearing him talk about Dick LeBeau.  Brett says that every morning LeBeau bounds into the room and says "Good morning, men - it's a great day to be alive."  He says that Coach LeBeau never yells or puts you down.  But if he thinks you aren't giving your best effort, he has a look that makes you wish you hadn't disappointed him.  He feels that Coach LeBeau has been one of the biggest influences in his life.   He also commented how much the team likes each other and likes to be around each other, and he claims that this stems from the Rooneys.  Finally, he said that he loves Pittsburgh, the fans, Renegade, and playing for this team.

Maurkice Pouncey was up next, and he talked about being drafted.  He said that when the phone call came San Francisco was on the clock, and he didn't want to pick up the phone, because he didn't want to go there.  When he did reluctantly pick it up, it was Mike Tomlin, who said "How does it feel to be drafted by the Pittsburgh Steelers?"  He said he was too happy to talk - he just smiled for the first two minutes.  He didn't talk long - he opened it up for questions quite soon.  Unfortunately most of the questions were along the "Will you sign my rookie card?" line.  Here are the answers to a few of the better questions: 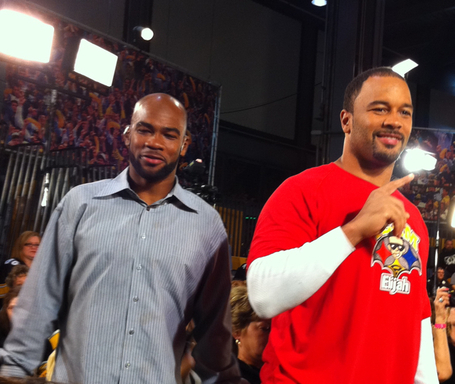 After the speeches we were split into two groups, and my group had the tour first.  We were taken up to the press box, and got to see Myron Cope's booth.  Then we toured the locker room.  It was interesting to note that although most of the player slots are in numerical order, Hines Ward and Brett Keisel are together.  That is by request, and according to the guide, they are the biggest practical jokers on the team, and are always cooking up some scheme or other.  The plaque in the picture is on the wall between the locker room and the tunnel.  Next we went through the tunnel out to the field and let us have a go at kicking a field goal.  Despite the fact that the distance involved was rather small, not many were made  One lady in spike heels did come amazingly close, to my utter amazement - I couldn't believe she didn't get stuck in the turf.  However, I don't think Jeff's job is in any jeopardy, at least from us. 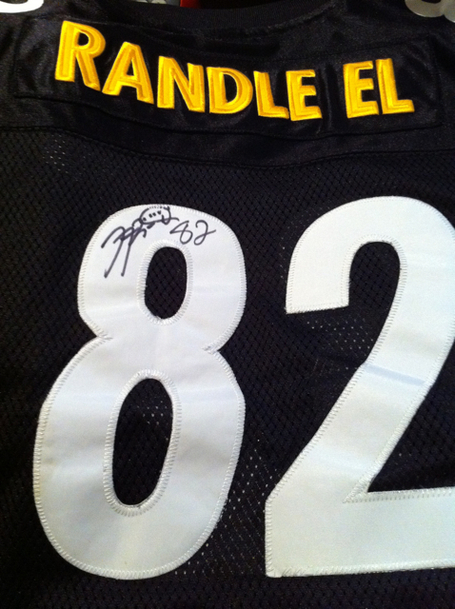 Eventually we were taken into the main hall and were the studio audience for a taping of the Steelers Huddle program.  Randle El was the host, and his guest was Larry Foote.  The two men gave an all-world demonstration of trash talking during the Q and A competition that showed just how valuable they are to the team.  Although the mood was mostly very light-hearted, Larry Foote became quite serious when asked how it felt to be back in Pittsburgh.  He commented that he hadn't realized how lucky he was here until he went to his first road game last year.  Seeing about six Lions fans in the stands was a major shock to his system!

As we were leaving, I had the opportunity to add a bit of flair to my ARE jersey (see below.)  They also gave us goodie bags with a seriously cool, new design T shirt, a yearbook, and autographed pictures of Brett and Maurkice.  Now my only problem is knowing which one to put under my pillow tonight!

All in all, it was a very fun evening - almost as much fun as it is going to be watching the Steelers demolish the poor unwitting Browns.  As Tom Lehrer would say, "Fight fiercely, Steelers, fight, fight, fight, impress them with our prowess, do!"