Actions and Reactions: Who Polices the Police?

Share All sharing options for: Actions and Reactions: Who Polices the Police?

I apologize if I am beating a dead horse here, but I've been writing this all week and I didn't want it to go to waste.  My thoughts on the James Harrison situation, which I know has been covered quite well by this community.  You won't hurt my feelings by turning me into the department of redundancy department.

There are times in a football game when the officials fail to see a violation on the field.  This occurs mostly away from the ball.  Even seven men cannot see the entire field 120 yards long and 53 yards wide.  These violations get corrected by the league office after the game, by either fine and/or suspension.  Curiously, this was the not the case with James Harrison on Sunday.  On both of the plays where his contact was later called into question, the football was with the player he hit.  A minimum of two officials, on each play, saw exactly what transpired.  None of those four men called a penalty on Harrison after those two plays.

Harrison's problems did not commence with his actions on either play.  Those four officiating no-calls proved that.  Harrison's problems began when the two players in question, Josh Cribbs and then Mohamed Massaquoi, failed to get up after the play.  Had both Cleveland Browns bounced up and trotted back to the huddle, this would be a complete non-issue right now.  Those plays wouldn't even be worthy of replay.  Not a soul would be talking about them.  Like the tree that falls in the forest with no one around, it would not have made a sound.  It was the reactions by Cribbs and Massaquoi, not the action by Harrison, that began Harrison's nightmare.  Neither player returned to the game after sustaining concussions.

Harrison's problems were exacerbated later that day when everybody learned that there were two other similar patterns of behavior.  By Monday morning, we had an NFL epidemic.  With now three plays of similar nature and result (The NFL and even several Cleveland Browns deemed Harrison's hit on Cribbs to be perfectly legal), the league began feeling compelled to multiply each alleged "offense" as if one player committed all three.  Again, we are now way beyond the original actions, and now deep into the reactions of a nation.  The Cleveland media, having nothing better to write about these days, years, decades, ran four headlines about Harrison's hits on the front page of Tuesday's sports section.

The NFL, standing for kNee-jerk Football League, felt the heat of those three (or four) plays breathing on their ivory-towered neck.  Dunta Robinson and Brandon Meriweather, Harrison's unconnected partners in crime, drew fines of $50,000, While James himself was tariffed $75,000 for being a repeat offender.  Curiously, when Cleveland Brown T.J. Ward committed virtually the same "crime" in week four of the NFL schedule, a hit that was indeed penalized by the two officials who saw that play, Ward was only taxed $15,000.  Ward was lucky that on his day no other defender joined his ranks, so he got the bargain basement discount.

So the messages from the NFL are as clear as mud.  The first message is that if you jack a guy up, you better hope he bounces back to the huddle to avoid the league's wrath.  It's not your action that counts, but your opponent's reactions.  The second message is the NFL's law of exponential punishment.  Add the number of players on a given day who commit an infraction, again not based on what the officials are looking at, and then fine each player the total amount that all players should be fined.   That makes sense.

The NFL tells us that player well-being is first and foremost, yet is about to drag its human gladiators into the arena two more times per season?  At least give the league credit for being transparent about talking from both sides of its mouth.  The truth is, the NFL is concerned first and foremost about its PR Machine.  Steelers' fans learned that the hard way with Ben Roethlisberger.  Ben registered high on their PR Meter and got slapped with a four-game timeout.  Meanwhile, Oakland Raiders' Head Coach Tom Cable breaks an assistant's jaw after physically abusing two women.  The NFL checked its PR Meter and didn't see much outrage so it decided to do nothing.  Shaun Rogers violates federal law by carrying a concealed weapon, loaded no less, into an airport.  The Meter registered "irrelevant" so the NFL spin doctors decided that suspension would gain them no favors.

Actions don't mean anything to the NFL.  We've seen that time and time again.  The PR Machine is only concerned about reactions.  You mess with the PR Machine, move the dial on the PR Meter, you'll pay the price.  There is no way on this planet or any other that you can justify fining Dunta Robinson three times the amount that T.J Ward was assessed.  To use Mark Schlereth's word's, "It's criminal."

The NFL has been peddling its greatest hits at least since 1988, when I received my first video.  The video below is chalk full of hit after hit after hit, all of which are similar in nature to what the league was appalled by this past Sunday.  James Harrison was 10-years old in 1988.  He grew up watching what the NFL was selling throughout his life.  Now, all of the sudden the very product that made the NFL popular is being washed away like Pontius Pilate.  Nothing hypocritical there.  Photos of the very hits the NFL fined last Sunday were on the league's web site for sale. 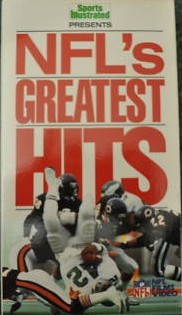 OK I get it.  We are learning more about concussions as modern technology leads us into the future.  Players are launching themselves into other players instead of wrapping them up and tackling like the good old days.  There's a trend here.  The winds of change may well be upon us.  I'm on board.  Let's talk about it.  Let's decide what we want in the future.  Let's be clear to our officials how they should call the game.  Let's show the players clearly the do's and don'ts of their profession, and then clearly delineate the sanctions, and then be consistent with those sanctions.   I'm good with all of that.  I'm all for player safety, apple pie and 16-game schedules.  The landscape of the NFL is constantly changing and we need to adapt.  The Players' Association needs to be involved along with the NFL's Competition Committee.  Let's talk, communicate and adjust  if need be.

But to retroactively punish and over-punish a player for an act clearly seen and absolved by game officials, hired by the very hammer the player is being pounded with, by an unprecedented fine, for an act that the Gestapo turns around and sells for profit on its web site and through its video department, is absolutely and categorically unconscionable.  The sad thing is, there no one to police the police.