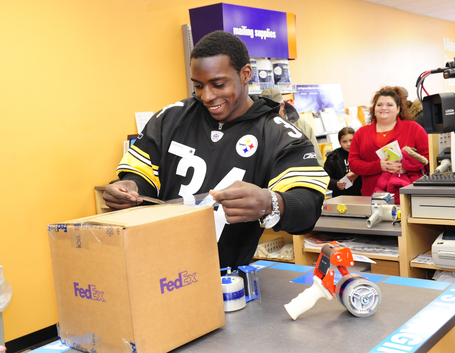 We let you all know last week that Rashard Mendenhall would be at the FedEx Office in Monroeville, PA to help jump stat their "Pack and Ship" program.  A representative had graciously contacted us about conducting a 10 minute interview with Rashard.  Well, everything went over really well and below I will provide the questions and answers I have transcribed.  Mendenhall is very soft-spoken so some of the answers are the general gist of what he said and not completely direct quotes.  Keep in mind that Rashard is not a man of a thousand word, but he is very concise and deliberate with his words.  Again, a huge thanks to FedEx for giving us such a wonderful opportunity. 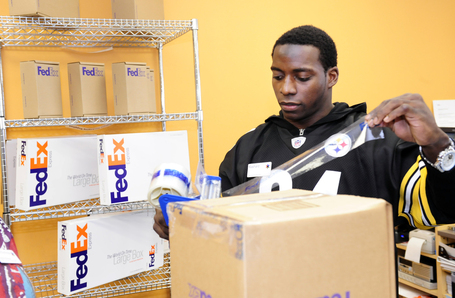 What are you doing at the FedEx Office in Monroeville today?

I’m here in Monroeville for the "Pack and Ship" program to interact with the fans and learn how things work behind the scenes at FedEx.

How did the injury that sidelined you in your rookie year affect your development? Did it benefit you because you got to learn the playbook or did it hinder you because you were not out there getting physical experience?

I think it helped because, although I did not get the physical experience, everything else you can learn without playing, being around guys like Willie [Parker] and Carey [Davis] and being able to see how they work every day. So I feel like I learned a lot off the field.

I am a bit of a stat geek and I have noticed that a large portion of your rushing yards come after first contact. What do you work on that makes you so tough to bring down?

I think it is natural, because I have been playing since I was younger and being able to break tackles and things like that. I think it is a combination of things with the training and strength that helps.

What is your take on the NFL cracking down on what they term violent hits? Do you think rules should be put in to protect runners like yourself?

I think there has to be a balance. I understand trying to protect players, but at the same time I think with a lot of these hits it is going overboard [with the fines and penalties]. A lot of times it is not done out of malice; sometimes when you have a helmet on helmets collide. It is not always intentional and it is not always meant to hurt someone. So, I think there should be a balance between exactly what they are trying to do and accomplish and they should be fair throughout the league.

I could not agree more. Were you excited when the Steelers drafted Maurkice Pouncey, who was known for his great run blocking?

Yeah, you always feel good about getting a lineman in the first. When you think of Maurkice and what he has been able to do since he has stepped in already, not only as the leader of the offensive line, but of the entire offense it is really impressive. Everything he has been able to do is incredible. It is way beyond what you would expect from a rookie, even a first rounder and it is a lot more than people thought he would be able to do this early.

So would he be your favorite lineman to run behind or do you have another guy you prefer?

It is hard to say. Those guys work together and every guy brings something different to the table, whether it is Maurkice, Kemo, Flozell, Max, Colon or whoever has been there, they bring different things. They all work in unison and we all work together.

Do you have any pregame or game day rituals?

Not so much, I try to keep everything normal.

At Behind the Steel Curtain we have created two affectionate nicknames for you. They are "Spin-then-haul" and "The Spin Doctor". Which do you like better or do your teammates have a nickname for you that you like?

At the [could not make out the word, but he is probably referring to Illinois] they used to call me RAC, which stood for Run After Contact. But, the Spin Doctor is not bad; I like that (laughing).

I see Chris Johnson as a speed back, Steven Jackson as a power back, and Ray Rice as a pass-catching back. I see you as a Jack-of-all-trades, a back that can do it all. What do you think about that?

I feel the same way, being very productive in each aspect. For my team, I like, in short yards, to be able to run with power and break a big play. I also can be productive in pass plays by catching or by providing pass protection. So I feel like all of that is a part of my game.

I was lucky enough to attend the Baltimore game and it was a great experience. Can you expound on how big of a win that was for your team?

We really needed that [win] as far as the AFC North where they already had one up on us. Going forward with playoff positions, there are still a lot of games left to be played, but beating them at their place was a step in the right direction. If we are able to build on that we should be in good shape, hopefully.

He is getting better every day. You could see when he first got here there was that natural running back and he was breaking tackles and things like that. This year he is getting a shot at short yards and third downs and he had a big game last week (the TD against Baltimore) and, yeah, I think he is continuing to grow.

How do you feel about the Steelers playoff chances? I know you are taking it one game at a time, but does that creep into the back of your mind that you guys have a really good shot at the playoffs now?

Yeah, but like you said we are trying to take it one game at a time. There is still a lot of ball to be played so we are looking at it like that.