Share All sharing options for: Week 13 Sprint Game Ball of the Week

Who to award our fictitious Behind the Steel Curtain Week 13 Game Ball to? It's hard most week to identify a single players who's most responsible for the Pittsburgh Steelers success. But last Sunday's win over the Baltimore Ravens really was a team effort. Guys like David Johnson, Isaac Redman, Shaun Suisham, and Ziggy Hood, to name but a few, all chipped in with important contributions. Without those contributions, the Steelers aren't even in position for Troy Polamalu to make the game-changing play that he did when he stripped Joe Flacco late in the fourth quarter.

Nevertheless, I think this week's game ball has to go to Ben Roethlisberger. Playing on an injured foot, Roethlisberger was far from perfect throwing the ball. In fact, he was less accurate with some of his throws than I've seen in a long time. Still, the fact that he played as well as he did speaks volumes about the type of competitor that he is. Oh yeah, it wasn't just his foot that was bothering him. On the very first series of the game, Roethlisberger had his nose smashed by arguably the fiercest player in football, Haloti Ngata. Bloodies, battered, bruised, Roethlisberger hung in there and ultimately continued his perfect mark against the Ravens. 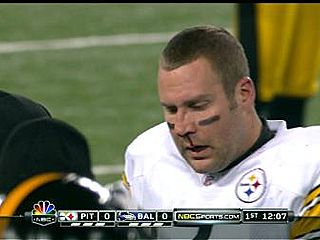 Hopefully Big Ben has healed up some this week and will be ready to go come Sunday when the Steelers host the Cincinnati Bengals. As I'll be writing about later, there haven't been many quarterbacks better than Big Ben during the month of December since 2005. Steeler Nation looks forward to him continuing that trend next week and down the stretch for the seemingly playoff bound Steelers.