Onward with our breakdown of the Pittsburgh Steelers roster as the 2010 offseason gets underway.

2010 Outlook: Though Ramon Foster played fairly well in his absence, Kemoeatu will most likely be the starter at left guard come opening day next season. I am of the opinion that the entire squad is going to prepare, practice and play with more purpose and fire next season. Chris K, who's always had a bit of trouble focusing for extended periods of time, might be one guy who really benefits from having Sean Kugler as the new offensive line coach. There will most likely still be some dumb penalties and mistakes made in pass protection from Kemoeatu, but if his 2010 season is anything like the first half of his 2009 season, then the Steelers and their fans should feel fairly confident in how the left guard position is being held down.

2009 Analysis: I'm not sure how exactly to asses Essex's performance last year. Firstly, it's hard to say how accurate the sack stats are that I've found. Seems like Essex was beat more than that. That said, I was a strong advocate for how the line was playing during the first half of the '09 season. Big Ben was getting sacked some, but he also had all kinds of time to throw the ball more often than not during the Steelers 6-2 start to the season. And in the running game, there were holes opened up by the guys up front - when running plays were actually called, and in non predictable fashion. Anyway, Essex had mostly filled the niche of reserve tackle for the first four years of his career before getting a chance to start at right guard in '09. Considering his experience on a winning team and his positional versatility, it's possible that Essex could play himself in to a contract somewhere else after 2010 if he were able to again get a chance to start and play regularly next season.

2010 Outlook: With a new offensive line coach in town, Sean Kugler, it's impossible to say who may or may not have an upper hand at winning the right guard spot opposite Chris Kemoeatu next season. And that's of course before we even see what happens in the Draft. Regardless, Essex will likely be called upon in some capacity next year - be it at tackle or guard; as a starter or as a reserve called in to action due to an injury to one of his teammates. He's well worth the ~$1 million he'll make this year.

2009 Analysis: It's quite a shame that Stapleton missed the entire 2009 season after having arthroscopic knee surgery last summer. It didn't respond the way he and the team had hoped, so they shut him down for the year and placed him on IR prior to the first snap of the regular season. Why a shame, you ask? Well, for Stapleton personally, it was a huge year for him career-wise. He had a fairly remarkable 2008 season all things considered. He was forced in to action when Kendall Simmons went down early in the '08 campaign. The undrafted free agent from Rutgers adapated to his new position (he was a center in college) and had his moments during the Steelers SB season. Did he get smoked on occassion? Yes, yes he did. But the kid was only 23 years old at the time and had never taken an NFL snap prior to being thrust in to the fire. He wore down a bit but that's to be expected somewhat from young players. Had Stapleton been able to play in '09, he might have been able to position himself to get a nicer contract or opportunity in '10 and beyond. It wasn't meant to be.

2010 Outlook: I'm fairly confident that the Steelers will tender Stapleton in the coming weeks. That's not to say I think the organization believes he's a long term solution, but for his price, I think it makes sense to keep him around to keep competition levels at a healthy level this coming summer. Also, for all you who just think he's too small and no good - I'd suggest remembering that he is still only 24 years old. He's one of the youngest dudes on the team - younger than one of his competitors for playing time - Kraig Urbik. I believe in Stapleton and think he might actually be a viable option in 2010 if the organization decides to draft another position in the 1st round. 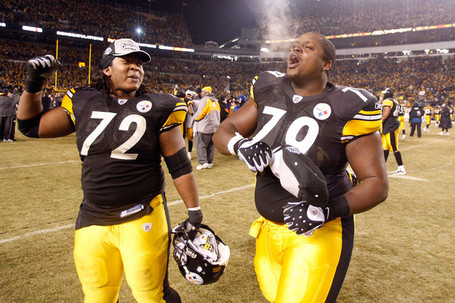 2009 Analysis:  Foster filled in in a pinch when Kemoeatu got injured, starting 4 games at left guard. During the preseason, we heard how Foster was picking up his responsibilities from a mental standpoint extraordinarily quickly. Foster started four years at tackle at the University of Tennessee, but he was able to make the transition to guard fairly seamlessly in his first year. For an undrafted kid, that's not too shabby.

2010 Outlook: Foster began the year blocking on special teams units, and may very well return back to that role next year depending on what the organization decides to do during free agency and the Draft. We just don't know what the top brass are thinking at this point. Is it possible that Colbert et. al feel confident in Foster and his ability to improve enough for them to shy away from drafting a guard in the 1st round this April? We'll just have to wait and see, but one thing's for certain - Foster is definitely going to get a shot at competing for a job based on his contract status and his ability to pick up the nuances of a new position at the NFL level in his first year.

2009 Analysis: Color me disappoionted that Urbik wasn't able to make his way to the field at all in 2009. When he was drafted as the first of the team's three 3rd Round picks out of Wisconsin, I thought we were getting a guy who was battle tested and ready to be thrown in to the mix. Maybe he was and just wasn't given the chance - a shoddy preseason will do that to your chances. Perhaps though he was just able to survive and excel in the Big 10 where there's very little speed at all for the most part. I don't know. Again, I'm anxious to see what Kugler can do with Urbik.

2010 Outlook: Read above. What much is there to say about the guy at this point. I'm assuming he's been working his ass off improving his foot speed and his strength, and hopefully his disappointing rookie campaign has him hungry to make a big push in year two. We'll see. The team certainly has a vested interest in seeing him materialize, so if it's a close call at all, I'd imagine that Urbik would get the nod over both Stapleton and Essex in '10. That of course is contingent on the organization not using a high draft pick on a guard again this year. But, if you stop to think about it, it really makes little sense for the team to do that considering where the drafted Urbik last year - early in the 2nd round.

This poll is closed