Share All sharing options for: I Couldn't Be More Inspired By A Man I Don't Even Know

I realize that John linked to this in his six pack this morning, but after listening to the entire Dick LeBeau interview from earlier in the week on ESPN 1250 in Pittsburgh, I wanted to share a few of my thoughts on it as well as provide you all with a transcription of the entire interview. I'm guessing a number of you can't listen to such things at work, so I thought it might be useful. LeBeau is that special of a coach, and more importantly and impressively, Mr. LeBeau seems to be a truly special and remarkable human being.

Here's the interview, with a few of my comments sprinkled in around his answers.

On what the honor means to him:

"Well my feet haven't really hit the ground yet. I can't hardly believe it. I pinch myself every 15 or 20 minutes, but I guess I'm not dreaming. It's a life long dream really, and I'm just so humbled and honored to be joining all those great players. Mike, enough of my current and past players made enough plays to keep me employed and in the public eye long enough for it to happen. So I thank you guys very much."

On the lack of turnovers created by his defense this year:

"Well, turnovers and interceptions, sometimes they run in bunches and you can go quite a few games and not have any. And then all at once, you get a lot of them. We had a down year in turning the football over. There's no question about that. Generally speaking, it's a combination of things - there's not enough consistent pressure on the quarterback, the coverage has too many areas in where the quarterback gets an easier throw with a higher percentage pass. But more times than not, the players that have the opportunity to make those turnovers and catch the ball for some reason don't get it caught. We were certainly negligent in all those areas, and it's an area that we're going to address very strongly. You got to turn the football over, you got to play good consistent defense, but you got to help your offense too."

My thoughts: I often thought the same thing about turnovers this year for the Steelers. It's just how the cookie crumbles - sometimes good fortune just comes in flurries. But, like LeBeau said, you have to capitalize on those opportunities when players are in position to make impact plays.

On if there's different pre-snap reads for different positions in his defense and if so, if that makes it harder to young guys to quickly pick up the nuances of his schemes at certain positions than at others:

"Well the playing progression is the same for all players. The all have to take an initial key, everyone of them or you'll have no defense. There's no such thing as just reacting, because there'd be no coordination, and defense is all about communication and coordination. And so therefore every player on the field has an initial read. They must take that key. From there on, the reaction should be - we would hope- second nature because through practice and execution we try to free them up in a positive way. But they have to first take their key in order to fit in with every other player on that field, or you've got no defense at all. So the answer to that is every position has a pre-snap and a snap key, and then they just haul ass to the ball."

On if he feels any added pressure to continue tweaking his defense and innovating with his schemes because of the struggles defensively from Pittsburgh this past year:

"Well I think there's always pressure to produce for all of us. But I don't look at it as pressure, I look at it as an opportunity. I would take exception to the 'down year'. We were fifth, now that might be a down year for us, but in that respect we're a little bit guilty of our success. I've been in the league a long time, and there's many, many years that I would have traded everything I own for a 5th place defense. But the truth of the matter is we were world champions one year and didn't make the playoffs the next. So, everybody's got to do better. I'll go through the same process that I do every offseason, and that's I'll look at everything and do everything I can to hopefully make us a better team. That's what we're doing right now."

My thoughts: So true. We're spoiled as Steelers fans. A top 5 year and we're of the mindset that absolutely nothing went right defensively this past season. Despite all that, LeBeau is still man enough to admit that everybody has to get better this coming season, including himself.

On if there was a particular player he developed an especially close bond with over the years:

"Well I've been absolutely blessed to be received by the people that I coach. They've paid me the highest compliment - the ultimate compliment - in listening to me and trying to do to the best of their ability what I ask them to do. I have to say that the time that all the players put on my jersey is definitely the most flattering thing that's every happened to me as a coach in the National Football League, I've never heard of anything like that happening. I don't know that it ever has happened. But to have your whole defense put on the old number that you played and wore, maybe some 36 years ago, or 34 years ago or whatever. I was absolutely speechless and it will always be a memory that I will cherish as long as I live. But I've been blessed to have great players to coach, and they're the reason I've stayed around in the public eye at all. I'm grateful to every one of them, particularly grateful to this group we have right now that has been so outstanding defensively. And we're looking to get right back there atop of the league and I think we will." 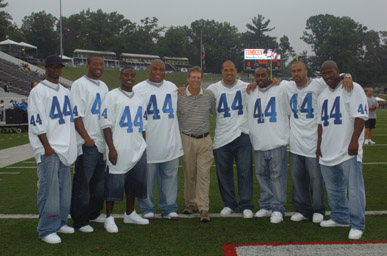 On being acknowledged for his incredible playing career and if he's decided who will present him when he's inducted in Canton later this summer:

"Yeah, my brother. I'm proud of the fact that they only considered my playing career in this decision. My coaching career didn't count and the reason that a lot of people don't know anything about me as a player is because it was 37 years ago - 1973 was my first year of coaching, so there's an awful lot of people around who are not that old. I'm proud of what I got done as a player, I'm equally proud of what I've been able to do as a coach. In both endeavors I've fallen fall short of what I've wanted to do many times, and yet I've always done the job as hardly as I could do it, and as fairly as I knew how to do it. I've always been blessed with good teammates when I played, and wonderful players to coach. These Steelers have been so good to me. In every way that's ever happened to me was coming back to Pittsburgh where we've won two world championships, and in three of the six years since I've come back, we've led the league in defense. It's just a tremendously humbling thing, and I get credit for a lot of it, but it's all the players who've done it."

My thoughts: Deflecting credit at a time that's supposed to be all about glorifying him and his accomplishments. That's Coach Dad. I would absolutely love to have that kind of influential presence in my life. I do, for sure, but wow, what a blessing for the countless folks who've had their lives positively affected by knowing and working with Dick LeBeau.