IX- One of the more perplexing moves the Steelers made this year was putting WR Limas Sweed on IR near the end of the season with an unspecified injury.  An unspecified injury?  In my honest opinion, that sounds like some bad blood between the potential bust WR and the Steelers organization.  Allegedly, Sweed was on Tomlin's bad side after he dropped the XLIII Lombardi *rim shot*.

Getting to the point, Aaron Wilson of National Football Post recently tried to find out more about this mystery but only found the Steelers remained "tight-lipped" on the issue.  Director of football operations, Kevin Colbert said, "That's something that will be addressed at the proper time and now's not the proper time."  Colbert's statement only makes the issue more curious for me.  What issue could be that sensitive that it requires the proper time, months after the "injury", to announce?

X- Well apparently the New England Patriots won the majority of the "decade" awards.  I never understood the big fuss over the team of the decade stuff.  In ten years, will we all really care who was the best team in the 2000s?  I won't.  I will be focused on who the best teams are right now, because they don't hand out Lombardi's for being the best team of the decade.  As it stands right now, I believe we are a better team and the Patriots have a lot more question marks in their looming future.  Just look at Randy Moss who declared he will not play for the Patriots after 2010.  Congrats to the Patriots on taking team of the decade, but please move aside while we try to add to our Lombardi trophy room.

XIII- Over at Benstonium.com, the guys have created a new video paralleling this season's "Superbowl hangover" to a man's recollections of a long night of drinking. Go check it out and let me know what you think.

IV- During the season PixburgArn and I had discussed whether or not Troy Polamalu should forgo the remainder season and go under the knife.  According to RotoTimes.com, a site powered by NBC Sports Troy Polamalu will not get surgery on his torn PCL.  Apparently, they believe that resting the knee will be the best approach.  I am not sure if that is good news or not, since I do not have much experience with PCL injuries.  However, most people doctors know more than me, so I will trust their assessment. 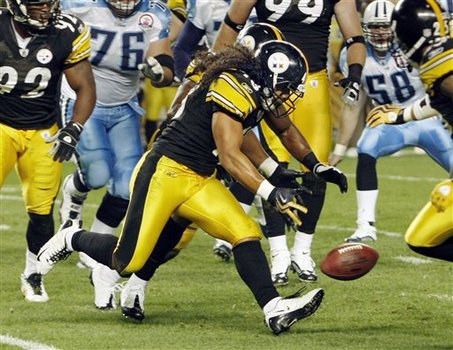 XL- I have a hard time following all of the combine because of my inability to remember names (I'm a numbers guy).  One thing I do get into during the combine is the videos of random athleticism from these college players.  Whether it is Jason Gilbert jumping out of a pool or Keith Eloi jumping into a truck bed I dig it.  Do these videos have any impact on a player's draft?  Probably not, but I buy into the hype.  Here is the most recent one of a "back flip" competition between Jason Pierre-Paul and Kion Wilson:

XLIII- Don't forget to keep voting for BTSC in the 2010 Pittsburgh Sports Blog Tournament.   We won our first three match ups and have moved onto the semifinals against Bucs Dugout. Be sure to vote for BTSC to move onto the Championship Round of the fun and well organized event.