Tomorrow marks the deadline for franchise and transition tags.

IX- Well it looks like we might have ourselves an Hungry Hungry Hippo angry, angry Casey Hampton.  News popped up yesterday that the Steelers are leaning toward franchise tagging Big Snack.  Keep in mind this is the guy who had this to say about being tagged in an interview, "You say we're family and you'll take care of me, and I feel like that's a slap in my face if you franchise me."  I don't expect Casey to get that mad because I am sure the Steelers are working out a long time deal with the buffet frequenter.  When all is said and done, I think this is great news for our organization, considering we now have the anchor of our defense locked in.  Keep in mind this report is still a rumor, but the Post Gazette does not go around spreading rumors.

UPDATE: It appears Casey is softening up to the idea of being franchised, realizing its just a process in working out a long term deal.  It appears that Hampton will most likely retire a Steeler. (thanks to swmt40 for the update)

X- Speaking of tags, BTSC member theatrain broke the news that the Steelers may be considering using a transition tag on Jeffrey Reed.  If all of this news is true, this off season and draft are going to be much less stressful for me.  Removing two "needs" from our roster leaves two extra picks to shore up our problems in the secondary and roster depth.  However, remember that the transition tag does not lock up Reed as a Steeler for 2010.  Another team can offer Reed a contract over the transition value ($2.6 million) and the Steelers have a chance to match it.  On the bright side, the issues with Reed's leg power will probably prevent that from happening.

XIII- It probably won't get as much coverage as LT parting ways with the Chargers, but Brian Westbrook was released from the Philadelphia Eagles today to save $7.5 million in salary next year.  I believe that Westbrook has been the best all around RB (running, catching, and blocking) in the league over the last decade.  Sadly, as most often happens with older RBs, injuries have severely limited his ability to produce.  Anyway, I bring up Brian because, unless he retires, the FA pool for tailbacks just got larger and the possible opportunities for Willie Parker got smaller.

XIV- Since I mentioned our other two big FAs, I would feel remiss if I didn't bring up Ryan Clark 's name.  In Ed Bouchette's Q&A on Monday someone asked him where the negotiations with Clark stood.  He responded, "Not much other than they are not anywhere near close to getting a deal done."  To read more of the transcript of the Q&A go here. 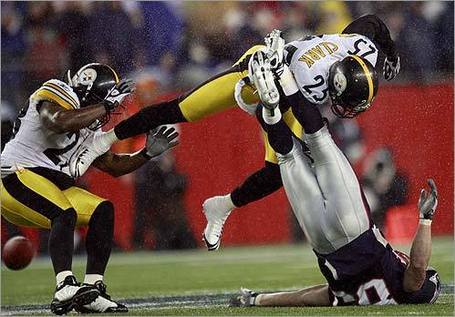 XL- Kent State has decided to honor James Harrison, their former player and current Steelers LB, by inducting him into their Varsity "K" Hall of Fame.  I know Harrison has had some off field issues previously, but you have to appreciate his outlook on playing football.  Here is what he had to say about the honor:

"It’s an honor whenever you get an award like that...I was just looking at another opportunity to do something that I enjoy doing. Any accolades that came along with it were just icing on the cake."

XLIII- All good things must come to an end, or so I have been told.  We had a great run in the Pittsburgh Sports Blog Tournament.  We advanced all the way to the final four and won our division with a few come from behind wins.  Does it make it sting any less knowing the blog who beat us was also a SBNation blog?  Probably not.  If you want to vote in the finals go here.