IX- Tim Tebow did a pre-combine interview talking about why he will not throw at the NFL combine and about his new throwing motion.  Since he is arguably one of the biggest names in the draft, I thought this video was interview was definitely worth a listen.  Many of you know I am one of the biggest Tebow haters, but after watching this video consider me partially impressed.  Sadly, he does not throw any balls in the interview which makes me believe he still does not have it down.  However, I am impressed with the knowledge he has developed and his display of how his new motion works.

X- As Blitz said, signing Casey Hampton to a long term deal ensures that the Steelers mean business and want to win now.  "Grab a NT in the draft," was a common cry when people talked about how expensive Hampton's contract might be.  However, that is not as simple as you might think.  Take a minute to think about how many teams that run or are switching to a 3-4s and then count the number of good NTs.  I have about 15+ teams and 7 good NTs with maybe 2 good ones in the draft.  A good NT is called the "anchor" of a 3-4 for a reason.  ESPN writer, Tim Graham, weighs in on the issue of NTs in the 3-4 and their high value.  (BONUS: the article has a quote from LeCharles Bentley).

XIII- The NFL combine has been up and running for a couple of days.  One of my favorite "tests" they do is the Wonderlic Personnel Test.  If you have not heard of it, it is a 12 minute, 50 question quiz.  Essentially, it is a really, really low-scale IQ test.  On average the offensive linemen score the highest and halfbacks score the lowest.  Ben Roethlisberger scored a 25, which I think is considered above average, even though its only 50%.  Anyway, try this 20 question sample for yourself.  20 questions in 5 minutes, good luck! 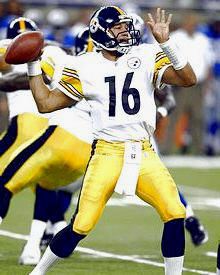 XIV- My favorite "under the radar" Steeler, Charlie Batch, earned the honor of being inducted into Eastern Michigan's Athletic Hall of Fame.  I've always had a soft spot for Chuck.  He never complained about being second fiddle, when he  had many opportunities to start in the NFL over the last few years.  Instead, he sat by and helped develop our franchise QB and filled in when Ben was injured.  The character of a player is sometimes just as important as his physical gifts.  Chuck clearly has both and I've always been proud to call him a Steeler.  Congratulations on the honor, Chuck.

XL- I am a bit light on news today, considering yesterday was a waterfall of good Steelers news.  Therefore, this Lombardi in the six pack will be used to talk about Madden, which I know many of you are fanatics about.  Did you know that the cover of the 2011 Madden will be decided by fan vote? That's right.  You get to pick who you want cursed for the upcoming season.  Choose between Drew Brees, Reggie Wayne, and Jared Allen.  I say vote for Wayne, because the Colts are in the AFC. 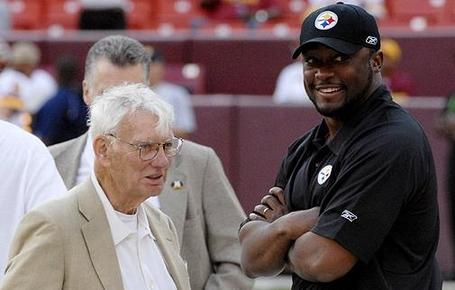 XLIII- Mike Tomlin has about two years left on his contract.  This is typically the time the Rooneys look to bring up a new contract.  Here is what Rooney had to say when he was asked about Tomlin's contract for the future:

"I don’t like to speculate on what we’re going to do with the coach," team president Art Rooney II said, "but let’s just say we certainly hope and believe Mike’s going to be here for the long term and we’ll deal with contract situations as they come up."

I suppose, as a Steelers fan, this is really no surprise to anyone.  A couple people think Tomlin still has to prove himself to earn his contract extension.  However, I believe Tomlin has already done a phenomenal job and will be here for as long as he is willing to lead us.