IX- I had no idea. Tom Moore, the longtime maestro of the Indianapolis Colts, was once the offensive coordinator of the Pittsburgh Steelers.  Yup, the only offensive coordinator Peyton Manning has ever worked with in the NFL orchestrated the Steelers offense in the 1980s. Moore was the receivers coach from '77-'82 before being handed the reins of the offense in 1983. He would be fired after the 1989 season following nearly a decade of unimaginative and stagnant offense. As Ed Bouchette astutely noted:

Chuck Noll hired Moore in 1977 to coach his wide receivers in an era in which Noll served as his own offensive coordinator. Moore helped develop the new passing attack they used in '78 when the rules changed and suddenly Terry Bradshaw's offense turned into one of the best in the league at throwing the ball.

"We went to the Super Bowl in '78 and '79 and we got more involved in passing and we still had the good running game, we were two-back because that's what our personnel dictated," Moore said.

Anyway, time's change, people change...and it helps having Peyton Manning making you look good. It's hard to deny though that Tom Moore has been one of the most accomplished offensive minds in football this past quarter century.

X - I hate to go here, but some somewhat entertaining speculation on the Bill Cowher front. Courtesy of? None other than Jerome Bettis. Bettis has speculated recently that Cowher is holding out for the New York Giants job. It does actually make some sense. Coughlin might be on somewhat thin ice heading in to next season considering how they've played since the midway point of the 2008 season. Cowher would then potentially be teaming up with one of the other few family run organizations in sports - the Giants. He'd have a veteran quarterback in his prime years, an organizational commitment to doing things the right way, and a history of playing a brand of football that's familiar with Cowher. Who knows though what will happen. The Giants could very well make another run next year, which in turn would probably grandfather Coughlin in to his job there for quite some time. 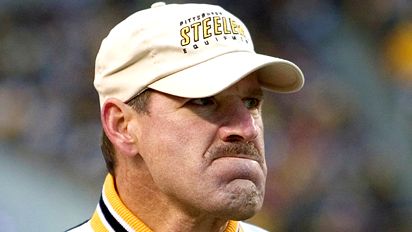 And, as Cowher is quick to point out:

"That’s Jerome," Cowher said. "It’s like us (the CBS analysts) up here. We say things to throw it out there and who knows? I haven’t talked to Jerome in two years."

XIII - Congratulations Troy Polamalu! #43 was named to the NFL's All Decade Team. He's the only current Steeler to make the team, though former Steelers Alan Faneca and Joey Porter were named to the squad as well. Solid honor for the likely Hall of Famer. I really can't wait to see the gold standard of highlight compilations someone puts together when Polamalu's career is over.

XIV - I'm bad. I admit it. But I just couldn't help it. Want to read a mediocre article about Tim Tebow and how the Steelers should draft him if he were available in the 3rd or 4th round (a ridiculous premise in and of itself)? Check it out here (shocking, Bleacher Report!). Okay, I wasn't actually going to be unnecessarily snarky until I got to the comments and read this gem:

Good characterization of Tebow's traditional Steelers mentality, a real throwback to the Chuck Nolan era. That said, you're probably right that we won't see him as a starting quarterback.

.God Bless the collective rationality and intelligence of you all here. I'll just say that...

XL- Well that didn't last too long. The love affair between Joey Porter and the Miami Dolphins might not last more than three years. Listen to Porter sound like a victim here; or if you're sans audio, read a quick overview about his 'plight' here. I recommend the audio interview though when/if you get a chance. For the record, I don't entirely blame Porter for his frustration - he feels he was underutilized coming off a monster year in '08. Still, look at your payday my man. Then realize it's probably best to keep your mouth shut.

XLIII - We've gotten our first taste of what the negotiations between the Steelers and Casey Hampton might look like. I wrote about the subject late last week, Hampton went on the record recently to say that having the Franchise Tag slapped on him would be a 'slap in the face.' Stay tuned. 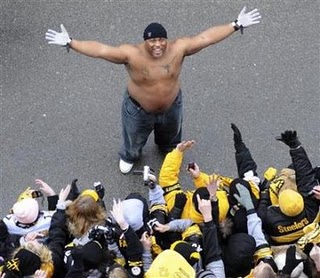