The history of the Pittsburgh Steelers prior to the Immaculate Reception was a well-documented series of painful memories.  Sometimes the woes of the team were self-inflicted, sometimes it seemed like the football gods were just not going to let them succeed and sometimes they just couldn't find the right chemistry.  In the case of Bullet Bill Dudley, one of the greatest players ever to wear a Steelers uniform, it was a combination of all three.  Dudley passed away in his home state of Virginia after suffering a massive stroke at the age of 88.

After nine years of failing to field a winning ballclub, the Steelers found themselves with the first pick in the 1942 NFL Draft, coming off a one-win season in which three different  head coaches took turns losing football games.  With that first pick, the Steelers took a running back out of Virginia, Bullet Bill.  Dudley came into the NFL and proceeded to lead the league in rushing when that was basically all the league did.  His 696 yards were alot back then.  The Steelers finished 7-4, a substantial upgrade from their 1-9-1 mark of 1941. 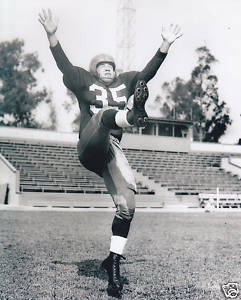 Dudley never left the field.  Over the course of his illustrious career interrupted by war, he scored 18 touchdowns as a receiver, 44 as a runner, threw six touchdowns as a quarterback and scored four as a return man.  On defense, he intercepted 23 passes and scored on two of them.  He successfully kicked 33 field goals and 121 extra points.

As the Pre-Immaculate Reception Curse would have it, Dudley and his new head coach in 1946, Jock Sutherland, could never get along.  Dudley's strong suits as a great athlete were instincts and creativity.  Sutherland insisted upon precision and standardized repetition.  The oil and water were just never going to mix.  I had a chance to visit with Bullet Bill in New York City in late 1997 and told him what a huge Steelers' fan I was.  He was adamant about the Steelers being a championship team in the late 1940s if only he and Sutherland could get on the same page.  "All the elements were in place and we were a hungry bunch who was primed to win it all," he lamented.

Art Rooney reluctantly sided with the coach in agreeing to trade Dudley to the Detroit Lions.  The Steelers, under duress, received peanuts in return.  Dudley continued his Hall of Fame career elsewhere.  Adding insult to injury, Dudley had some of his best games against the Steelers after he left them.

"I really don't know why," said Dudley.  "Jock was gone and I loved Art Rooney, so there was no animosity or hard feelings.  Somehow I had my best games against the Steelers, touchdowns, interceptions, everything."  Go figure.

After football, Dudley was elected to serve four terms in the Virginia House of Delegates.  Dudley was inducted into the Pro Football Hall of Fame in 1966.  Rest in peace, Bullet Bill. 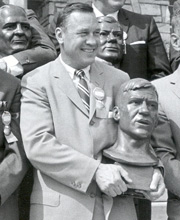