Share All sharing options for: Congratulations To Coach LeBeau On The Well Deserved And Overdue Hall of Fame Honors

"We love coach LeBeau. I don't think there's anything we wouldn't do for him."

As you probably heard by now, defensive coordinator Dick LeBeau has been included in this year's class of Hall of Fame inductees! It's quite an honor for the 72 year old. Here's an overview of some of his accomplishments in the league as both a player and a coach.

"Everything I do is because of (LeBeau)," Harrison said.  "If he doesn't call that defense that puts me in a position to make plays, I wouldn't be talking to you now." 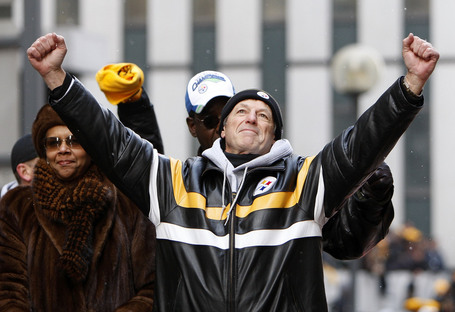 I could list all of the accolades LeBeau's defenses have collected over the years; all the individual honors his players have won. But that's not really the point. It's the entire body of work that makes Coach Dad such a living legend and so deserving of the ultimate honor - enshrinement in Canton, Ohio in the Pro Football Hall of Fame. It's an overdue honor for LeBeau, but as they say, better late than never.