Onward with our breakdown of the Pittsburgh Steelers roster as the 2010 offseason gets underway. 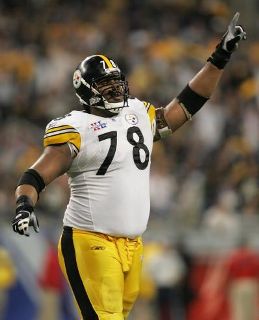 2009 Analysis: For the first time since 2005, Starks started every game this season but that doesn't necessarily mean that he had a great season. Playing offensive tackle with Ben Roethlisberger is certainly no easy task but by all accounts Starks had an inconsistent season. After a spectacular first half of the season, that included very good games against the Vikings' Jared Allen and Broncos' Elvis Dumervil, Starks faded down the stretch, as did the Steelers team as a whole. He can still struggle with speed rushers at times but inconsistency seems to be the biggest problem and he's still never developed into the mauling in-line blocker that his size (6-8,345) would suggest.

2010 Outlook: Make no mistake about it, Max Starks will be the starting left tackle in 2010. Any hopes or wishes that he'll be cut are pipe dreams at best. He's still owed quite a bit of money and with uncertain contract situations across the rest of the offensive line, Starks isn't going anywhere. Maybe a new offensive line coach will help shore up some of the flaws or maybe a slight change in offensive philosophy will help but either way, sink or swim, Starks will be the starting left tackle as long as he's healthy.

Contract Status: Restricted Free Agent (Unless a new CBA is reached, in which case he'll be a UFA)

2009 Analysis: For the third straight season, Willie Colon started every game at right tackle and I think it's fair to say that this was his best season yet. While that's not necessarily a ringing endorsement, at least the uproar over whether he's even playing the right position has lowered to a dull roar. Colon was playing well enough early in the season to earn BTSC's Most Improved Player award and perhaps Colon's biggest improvement was in the running game. He at times looked like a very competent and complete right tackle, despite a new guy taking his first snaps at right guard. He's still not an upper tier right tackle and he can still struggle with speed rushers as well as defensive line stunts but 2009 was a step in the right direction.

2010 Outlook: Colon's future is pretty unclear but it's pretty safe to say that unless lightening strikes (aka a new CBA is signed) he'll be back as the starting right tackle for at least one more season. I would imagine that Colon's long term future with the Steelers is dependent upon how highly he views himself. Right now he's a somewhat young, highly experienced yet relatively inexpensive starter, but it'll be interesting to see what kind of contract he's looking for once he's an unrestricted free agent. If we can ignore the long term aspect for now though, Colon is the type of tackle that should benefit from an increased commitment to the running game and perhaps some continuity with his right guard will benefit both players in the future.

Contract Status: Under contract through 2010

2009 Analysis: For the second consecutive season Hills didn't appear in a single game.

2010 Outlook: Considering that Starks and Colon were healthy for each and every game you'd expect that Hills wouldn't have played a down, but the fact that he was inactive for every game might also be a tell-tale sign. His status as strictly an 'offensive tackle' makes his future somewhat limited and most likely tied to the future of Willie Colon or the drafting of another offensive tackle, but youth is still on his side for a year or so. It's probably to early to say that Hills is on the hot seat in 2010 but this year's training camp will be very important to his future with the team.

Judging the play of Max Starks and Willie Colon in 2009 is about as difficult as it gets. Both tackles dealt with new guards and a quarterback that loves to hold onto the ball until the last possible second, or a full thirty seconds after the last possible second. In total both tackles had their highlights and low lights of the season but their future is more concerning right now. Should we expect better play from this pair in the future? Will a new OL coach help or maybe some consistency at guard or is the biggest problem simply their caliber of play?