IX- Looking for some of the NFL combine numbers posted by this year's crop of players?  Steelers Depot has done a good job of keeping track of the numbers and providing them to us.  So far the best Al Davis time 40 yard dash time I've seen was from Jacoby Ford, the Clemson WR, with a blistering 4.28.  Additionally, I heard one of the best combines has come from my fellow Maryland alumnus, Bruce Campbell.  He was one of only 2 OL to run a sub-5 second 40, did 34 on the bench, and put up an insane 32 inch vertical for a very big guy.  Lastly, irony was dealt a royal flush when Tim Tebow put up a 6.66 on the 3 cone drill.

X- Former Steelers Offensive Coordinator, Ken "The Whiz" Whisenhunt, just signed a huge contract extension with the Arizona Cardinals to remain their head coach.  We are talking about $6 million per year.  I mentioned in a previous BTSC Six Pack that the Rooneys will most likely be looking to extend Tomlin's contract pretty soon.  In any case, I wonder if Whiz's new big deal will have any impact on Tomlin's.  After all, Tomlin was coaching the team that beat the Whiz lead team in Superbowl XLIII.

XIII- When I first came to BTSC back in early 2009, I knew relatively very little about the game of football.  I was the average fan who knew the majority of the active Steelers and rooted  hard for the team.  However, I knew very little about defensive schemes and offensive systems that teams utilize.  After reading the stories, fanposts, and comments for a solid six months or so I have learned a ton.  It took awhile, so I decided to collect some articles on defensive schemes as sort of a "beginners guide" to NFL defenses.  3-4 vs 4-3 and Cover-2 vs Man-to-Man.  A very lengthy break down by the guys of FootballGuys.com on NFL defenses. Many people hate on Wikipedia, but I think it is a great source for basic knowledge.  Here is their stuff on NFL defenses.  And lastly, I am not an avid Madden player, but it is a great place to learn the basic defense formations, zone schemes, and blitz options.  If you have a good guide to NFL defenses please share them in the comments!

XIV- I just realized that NFL.com has a live feed of the combine.  Better late than never!  I just checked it real quick and they were doing some drill with group 8 of the defensive linemen.  If you have nothing else to do this could be a good time killer.

XL- Almost every single free agent (or potential free agent) defensive back has been offered up as a cure to our secondaries woes.  I say almost every, because no one has recommended Adam "Pacman" Jones...until now.  ESPN is reporting that Jones is going to be working out for NFL scouts down in New Orleans.  Why shouldn't the Steelers raise an eyebrow in his direction?  He would likely be very cheap and he has not had a run in with the law since October 2008.  If he doesn't look rusty, I must assume he can cover better than William Gay, right? I am going to play the devil's advocate on this one and support the idea, despite the fact that I do not actually want him on our team. 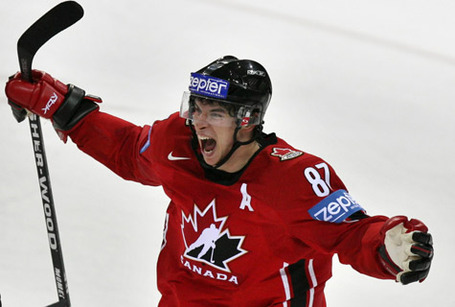 XLIII- Well the 2010 Vancouver Winter Olympics came to an end last night.  The last event of the Olympics was the long-awaited gold medal hockey final.  If you were not aware, team USA took on team Canada, which turned out to be an epic game.  Trailing, 2-1 with 20 seconds left, team USA's Zach Parise slid a puck past Canada's goalie to send it into sudden death OT.  Unfortunately, Canada took the gold medal as Pittsburgh's own, Sidney Crosby, put in the game winner about 7 minutes into the first OT period.  Personally, I am a Capitals fan, but I am curious how all of the Penguins fans, but USA citizens, felt as Crosby helped Canada steal gold from USA's grasp.