IX- Merrill Hoge received a great honor yesterday by being appointed as a member of the Board of Directors for USA Football.  Hoge joins NFL Commissioner Roger Goodell and others.  USA football is a non-profit organization that support and promotes the development of youth, high-school, and international amateur football.  Hoge has been deeply involved in the head injury issues and I hope that he promotes smart and safe football to America's youth.

X- I am going to link this story again just in the hopes that everyone reads it.  I thought it was a good read regardless of how you feel about the issue.  That's all I have to say about that.

XIII- Things keep getting worse and worse for Willie Parker in his expedition to find a new team.  He was scheduled to meet with the Kansas City Chiefs on Thursday for, what I assume, was a back up role to Jamaal Charles.  However, after what must have been an impressive visit yesterday, former New York Jets RB Thomas Jones signed a 2 year $5 million dollar contract.  The deal makes more sense for the Chiefs, it gives them the speedy back of Charles and a power back in Jones.  Parker thinks he can be a starting running back in the NFL, however it does not look like there is even any interest out there to have him as a back up.

XIV-Steelers offensive tackle, Willie Colon, claims he saw nothing while out with QB Ben Roethlisberger for his birthday.  His agent says he saw nothing and that "his name need not be mentioned anymore."  I do not believe that will happen, but I believe he is just clearing Colon's name from any negative connotations.  Colon will likely be on the list of people interviewed, but will not be able to give much of any support because he was "on the dance floor."  Willie Colon dancing?  I wonder if he attended Rashard "Delicious" Mendenhall's school of dance. 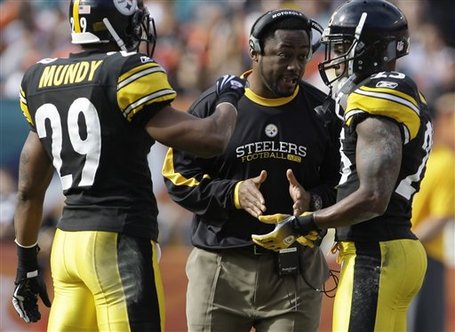 XL- Did I mention I love Mike Tomlin?  The other day I was certain that Clark was going to be a Miami Dolphin, and apparently, Ryan thought so too:

Unarmed with even so much as a contract offer from the Steelers, Clark said he went to Miami intending to agree to a deal with the Dolphins. He was so sure he would sign with them he did not bother scheduling a visit with another National Football League team.

And indeed, the Miami Dolphins offered a contract to Clark, but then Tomlin called Clark.  Tomlin said t they were going to fight to keep him in B&G.   So, they work up something real quick with Rooney and Omar Kahn, and boom, Clark is immediately on a plane ride home.  As Blitz has said, the Steelers are set up to win now, and evidently Tomlin agrees.

XLIII- Shameless self promotion:  Okay, it is not really a self promotion, but I wanted to make sure that everyone signs up for our March Madness pick'em group.  Make sure to sign up and make your picks.  Our group is just for bragging rights, but if you sign up on Yahoo you can click "Yes" to enter the national pool to earn a chance to win $1 million with a perfect bracket and $100,000 with the best overall bracket on yahoo.