IX- The excitement behind drafting Frank "The Tank" Summers has long ago faded far into the back of our memory.  Summers is a large physical back who, after the draft, drew the expected "The next Jerome Bettis" comparisons.  With such lofty expectations Summers was set-up to disappoint, but a season ending back injury early in the season removed his name from our radars.  If you are, like me, interested in what was happening with The Tank, Kelly Davies of Athlete Chat caught up with Summers during the season and just posted the story.  The article dives into his injury a bit and discusses his rehabilitation.  Oddly enough, he appears motivated by the process and believes he will return to the line-up in "the best shape of his life."  Maybe with a good training camp we can start comparing him to The Bus again.

X- There is a rumor out right now that Larry Foote is likely to sign a 3 year deal with the Steelers in the next couple of days.  I am not 100% sure if this is accurate or not, but I enjoy the idea of it being true.  I know a lot of people are skeptical about the Steelers signing older, "nostalgic" players, but Foote is only 29 and looked great in Detroit last year.  He offers great depth at LB and could even replace Farrior if he out performs him in camp. 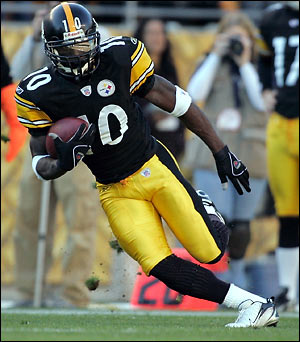 XIII- Santonio Holmes was on Mayhem in the AM on 790 the Zone in Atlanta for an interview.  Inevitably, Holmes was asked about the Ben Roethlisberger situation.  Here is what he had to say:

On my Twitter page, people have been hitting me up telling me to tell Ben to stay out of nightclubs and keep him this, this and that. I’m like he’s a grown man, he’s entitled to do whatever he wants to do.

I will not elaborate more on this, because I feel like the situation has become a dead horse beaten up like Mike Tyson in Lewis vs. Tyson.  Anyway, for more on the interview check out the story.

XIV- Since we are on the subject of Ben Roethlisberger's assault case, I might as well mention this other bit of news that popped up over the weekend.  Apparently, Ben's lawyer, Ed Garland, has hired a private investigator to look into the case.  I have a feeling that this case probably will not be solved for a long time and any bad games that Ben may have will be blamed on his "distractions" off the field.  Guilty or innocent, Ben has put himself in a tough situation.

XL- Am I the only one tho thinks the Jets have set themselves up to be a preseason favorite?  Consider me a fan of Rex Ryan.  After making some moves to get Cromartie, they went out and got future HoFer LaDainian Tomlinson.  The Jets seem to be the kind of team that many of us designate as classic "Steelers" football.  A stifling defense with a consistent pass rush and a commitment to running the football to wear down your defense.  The Jets playoff run was a beautiful thing to watch last year, and I will definitely be keeping my eye on them this year.

XLIII- Selection Sunday was yesterday, so the brackets are out and ready to be completed.  If you signed up for the league do not forget to make your picks.  Here is a link to the page.  And if you missed the memo and want to sign up follow this link for the directions.