IX- Hines Ward will be playing in a Celebrity Basketball Game today at 7PM.  The event will take place at Arlington Christian, a GISA school located in Fairburn, GA.  Initially, I got excited because I thought the game would be in Arlington, VA and I would be making a trip to Virginia after work.  Oh well.  Ward joins two other NFL players in the game, Champ Bailey and Jon Stinchomb.  If you happen to be near that area tickets are only 10$ and I assume it will be packed, because autographed jerseys will be raffled at half time.

X- This is good news, but it also sounds super suspicious.  The security footage from the night club the night of the Roethlisberger incident was accidentally overwritten.  I really do not know what else to say about that.  It just sounds a little bit fishy.  What do I know though?

XIII- I am stealing this link from user Bug Ben.  Props to him for the find.  Ryan Clark was on ESPN First Take the other day, discussing Ben Roethlisberger and his off the field troubles. Sorry, I know, this is getting really old and tiresome by now.  It is the off season though and Steelers related links are hard to come by that do not involve Ben.  Anyway, Clark is very candid and well-spoken, giving a really enlightened perspective from the inside.  Also, he probably has a better insight than a punter.  No offense Robopunter. 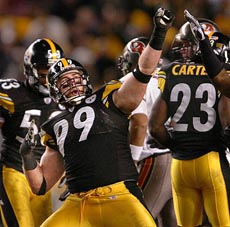 XIV-Air Jordan  Keisel?  On Monday of this week, several Pittsburgh Steelers, including Brett Keisel, formed a basketball team for a charitable basketball game.  The event took place at Clearfield Area High School and all the proceeds went toward the Children's Miracle Network, a foundation that raises money to "create miracles" for children's hospitals.  The Steelers team played against the Queens for Kids All Stars, a charity heavily involved with CMN and Janet Weis Pediatric Hospital.  The house was packed and the Steelers signed Terrible Towels and other paraphernalia for those in attendance at halftime.

XL- Random Statistic of the Day: Wednesday's rant in the Daily Six Pack got me to thinking.  Maybe I will do a random stat of the day in each six pack.  Let me know how you feel about that.  Today's is sack % or the sack per drop back rate.  Simply, looking at the total sack number can be misleading in many ways (i.e. a team that heavily favors the pass).  Sk%, as it is denoted on Pro-Football-Reference, is a better assessment of how often your QB is getting hit.  Last year, the average was 6.1%, or in other words, an average QB was being sacked on about 6% of his drop backs.  The Steelers were much higher than that at 8.5%, the 3rd worst in the league (in front of Oakland 9.2% and Buffalo 9.4%).  The Colts led the league with an absurd % of only 2.1%.  That is insane for a team that had 601 pass attempts (about 70 more than our pass happy offense).

XLIII- Let the countdown begin, or continue for that matter.  The NFL 2010 draft is scheduled to start Thursday, April 22nd.  That leaves us with 27 days to go until we can sink our teeth into some good football news.  I cannot wait until we find out who is "The Next Bus" or the Isaac Redman of this year's preseason.  Did you know that Redman is the only RB in NFL history to score 3 touchdowns on 1 carry? 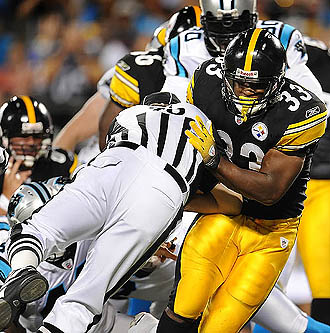