Sorry about the not-so-daily six pack this week.  With such great articles by Blitz and MR, I did not want to push them down the page with a six pack. Also, from here on out I am going to try to not have the Six Pack have anything on the Roethlisberger case.

IX- A few six packs ago, I referenced a great article from Niners Nation about the best picks from the 2nd round of the NFL draft from 1999-2009.  Well the author has decided to make it a series, and has moved on to "Cream of the Crop: 3rd Round (1999-2009)."  Again, the Steelers were the only team to land 2 picks in the analysis.  In 1999, the Steelers selected Joey "Get Your Hands Off My Taco" Porter (<< link to article where Porter is now alleging the cop struck him).  Also, rookie sensation Mike Wallace got the nod for 2009 over Shonn Greene.  I believe I was the only vote for Mike Wallace (Bias?  See my avatar).

X- I've been watching the vast majority of the mock drafts going on around the SBN football blogs.  The vast majority of them have us picking Mike Iupati in the 1st.  Finally, I found one that has us going in a different direction (sort of) and grabbing Maurkice Pouncey instead, even with Iupati on the board.  At this point, I have jumped around so much between McClain, Iupati, Pouncey, Wilson, etc that even House of Pain is awestruck.  22 more days until we can start clamoring about who the Steelers selected (and get away from the bad news). 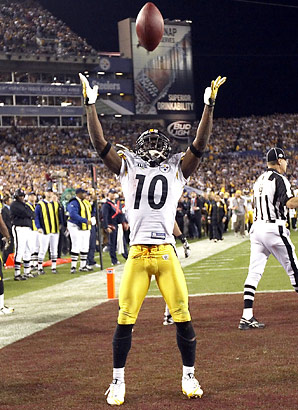 XIII- TMZ, the world's leading news reporting network, has come out with news about the Santonio Holmes allegations.  The article tells his side of the story, that is significantly different than her recount of the night.  His story claims another woman threw the glass that struck Mills in the face.  Additionally, it claims Mills spoke with Tone and a cop after the incident, was seen smiling afterward, and then told the cop she did not want to press charges.  Keep in mind, TMZ is...well TMZ.  Last year, I would not have put any belief in anything TMZ reported.  However, after Ben's incident, it seems they have been nearly first to report every outbreak of news from the incident.  If this account is accurate, it would appear that the entire thing was an overreaction and we can all go back to only worrying about Big Stupid.

XIV- Speaking of Mike Wallace, Steelers.com just put out a video interview with Speedy GonWallace (stretch?).   He talks about everything from his off season work outs, to WR blocking, to thoughts on his rookie year production.  My favorite part was when he talked about the blocking.  It sounds like Hines Ward and Santonio Holmes have been, and will be the perfect tutors for the development of the young buck.  Unfortunately, hearing him talk about how great of an influence those two have been to him makes me wonder what the heck happened to Limas Sweed. 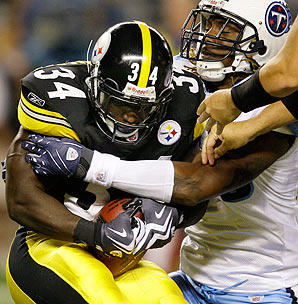 XL- Statistic of the week:  Let's take a look at yards after contact (YCo) for a RB.  ProFootballFocus.com does a great job at breaking down some very, very specific statistics.  For running backs, one of those specific stats is the amount of yards a running back gains after the first contact by a defender.  No surprise here, but Chris Johnson led the league last year, being the only RB with over a thousand YCo in the league with 1,071.  Rashard Mendenhall, came in 12th in the league with 686 yards after contact.  Considering only 1 player above Rashard had less carries and only 1 player had less than 100 more attempts than him, this is very respectable.  Moreover, Mendy has a 3.0 YCo/Att where the league average (for the top 25% of RBs in the league) is 2.5.  Finally, consider that our premiere back for the previous two years had a 1.9 and 2.5 YCo/Att, respectively (I wish they kept that stats before 2007).  Does anyone else believe his numbers could be better if he squared up his shoulders and ran down hill more often?

XLIII- I recall last year, someone doing "Funny Caption" contests on a weekly basis for fun last year.  I remember there being some pretty good ones.  So occasionally, I might start throwing a photo at you I think could be good.  I posted the following photo in a fanpost early last week.  A few people threw captions at it and I had a good chuckle.  So, let me see what you've got BTSC! 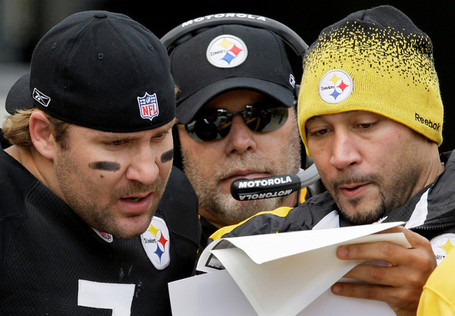