We've been rightfulyl distracted this past few days, but onward we go with the 2010 BTSC Community Mock Draft. Great stuff here from an old school reader and fellow, _.58._. Next up? The Seattle Seahawks once again, though this time they'll be represented by cleveland sucks rather than NYSteelerFan4. Let's try to get a few of these picks cranked out in the next 24 hours. Thanks all for everything so far! - Michael Bean (Blitz) -

In the Bay Area of California there exists an NFL Holy Grail of sorts, on a local level. The area has long been divided between the Raiders whacked out fanbase, and the 49ers faithful. Presently, with both teams in a prolonged rut, there are fans starving for success, and willing to jump one way or the other. Both ownerships know this, and the race to become relevant once again carries more than just your typical desire to succeed. It would be an economic windfall.

The San Francisco 49ers are a team desperate to get back to form. Their glory days of the 1980's and 1990's saw a team that would have easily taken apart anything the NFC West division has to currently offer. That has to be more than a little frustrating for the ownership and the teams fan base.

The team itself is a team on the rise, and a strong sense of optimism is tangible. The team has been making some very strong, deliberate moves to improve itself. Taking the "interim" tag off of head coach Mike Singletary was one step in the right direction, to many 49er fans, and the commitment to building through the draft has been another wise strategy.

The 49ers have had a strong retention rate amongst its draft classes over the last 5 years. Out of the 42 players drafted, 24 are still on the roster. During that time, they have kept 15 of their 16 players drafted between rounds 1 and 3. You could say that the worst part of the 49ers recent drafts has been the selection of QB Alex Smith with the #1 selection five years ago. But, entering his sixth season, the selection is looking like it might actually pan out...finally.

All that to say, this draft especially is HUGE for this team. They have struck gold in the last few years, and hope to do more of the same, but need to do so in each round. With a bevy of picks this year, including this high pick highlighted, they have a chance to establish themselves as the co-contender of this division, and set themselves up to own it outright in the next year or two. This is a young team for the most part, with 29 players with 3 years or fewer in the league, and needs a few more pieces to contend. Average age is 27.2, which is a little misleading when you realize there are some players that skew that age stat that aren't huge in the big picture. (A few examples: Isaac Bruce, 16 years; long snapper Brian Jennings, 10; kicker Joe Nedney, 14).

So without further ado, the San Francisco 49ers, with the 13th pick in the 2010 draft, select: 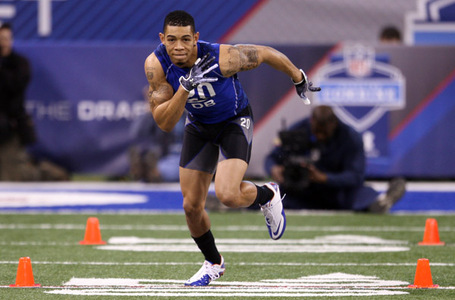 If Haden is still available here, this pick seems a no-brainer for the 49ers. The reasons are multiple, and valid. The one thing that could hold them back is history. The 'Niners have only picked 4 cornerbabcks in the drafts first five rounds over the last 5 years. They have chosen instead to look to fill the position in later rounds, through free agency, or finding gems who went undrafted. Unfortunately for them, they haven't found much going this route, which leads me to believe that round #1 will be defensive backfield help.

The 49ers have a history of taking the best player available, regardless of position, as well, which would make the Haden pick seem to make sense.

Shawntae Spencer had a fantastic year at corner for the 49ers. Their problem has been, who to start opposite Spencer? Nate Clements (aging, and inflated salary for what he brings as a starter) was benched during last season for Tarell Brown. Brown isn't exactly on every GM's short list for talent. With the unquestioned best cornerback available staring at you in the face, you simply must take him.

Add to that that the 49ers other needs (DE, O-Line, Safety, quality WR and RB depth) can be solved in the subsequent rounds, and that you have a defensive-minded coach who wants to put his stamp on this team...it all leads to Joe Haden lacing up his cleats in Northern California this next Fall.