Many thanks to cleveland sucks for promptly getting his pick in for the Seattle Seahawks at #14. We've got a ways to go before next Thursday, so hopefully we can keep this pace up for the next few days. Next up? The New York Giants at #15, represented by EnglishSteelerGotBanned. -Michael-

One thing that I know about Pete Carroll is that he is obsessed with speed at the RB position. Look at his USC teams and you will see Reggie Bush or some type of Bush clone (Joe McKnight) prevalent in his offensive schemes. The Reggie Bush clone's name for the Seabirds will be C.J. Spiller, the fast and powerful RB from Clemson. 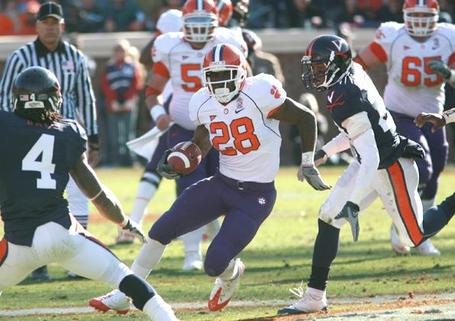 He fills in first in as a return man on a team that was average at best in the return game. While at Clemson the return game with Spiller was normally their best chance to score! He is a fantastic open field runner with burners that rocket him past would be tacklers with bad angles. After the return game, he will then work into the backfield rotation. If his blocking skills progress he could be the starter in a crowded backfield. Coach Carroll enjoy your new toy and try not to break it.

So know you know-