In the interest of moving the mock draft along Michael asked me to fill in for the Giants pick.  Up next is LuckyDom with the 16th pick for the Tennessee Titans.  We only have until Thursday afternoon to wrap up this draft so please try to get your picks to Michael at behindthesteelcurtain@gmail.com. (Frank Mineo- DYM)

The N.Y. Giants had a difficult year last year only two seasons removed from a somewhat surprising Super Bowl victory over the then undefeated New England Patriots.  Since then the Giants have struggled defensively and have struggled at times running the ball.  The Giants have few strong needs especially at Linebacker, Defensive Tackle, Safety, and really all positions on the offensive line.

The best players available by my count at this point in the draft are:

Looking at that list the Giants have no need for Clausen, and the performance of young players like Steve Smith, Mario Manningham, and Hakim Nicks make Dez Bryant irrelevant.  While the Giants have bigger holes on the defensive side of the ball, I think they take the best player available with offensive tackle Bryan Bulaga who I have seen mocked as high as fifth overall. 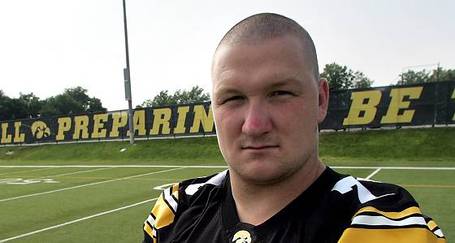 Bulaga has been hailed as the most complete lineman in the draft and could easily start in year one for the Giants possibly at right tackle.  Picking Bulaga this year allows the Giants to use the versatility of David Deihl who can play any position on the line except center.