Thanks to Frank for keeping things going at #15 and big tip of the cap to LuckyDom for the prompt selection at #16 for the Tennessee Titans. Perhaps an accurate selection too, we'll see. I'm curious to see whether Kyle Wilson or Patrick Robinson will be selected first. Next up? The San Francisco 49ers, who of course already picked at #13. That means double duty for _.58._. -Michael Bean-

**************
The 2009 Tennessee Titans defense finished 27th in total yards per game allowed, 28th in points allowed and 31st in passing yards allowed. After a war room discussion of 15 seconds it was concluded that the 16th pick would be used on a defensive player.

The two weakest areas being CB and DE had the staff hoping against all hope that either Joe Haden or Derrick Morgan would fall to us. Unfortunately that was not to be. Jason Pierre-Paul is a stud of an athlete but is so raw he, unlike Morgan, will not likely make an impact in 2010. With Jacob Ford and William Hayes now having two years under their belts and substantial playing time at DE the staff focused on cornerback.

Kyle Wilson has all the tools to be an outstanding shutdown corner for years but the lack of competition and no CB pedigree in the program at Boise State raised a flag. Some project Earl Thomas as a corner but the transition will take time and the staff sees him as a natural safety.

Much consideration was given to Devin McCourty of Rutgers but in what some may say is a reach pick, the Tennessee Titans select Florida State Cornerback, Patrick Robinson. He ran a 4.38 at pro day and most importantly is a playmaker from a program that has a history of NFL playmakers which the Titans sorely need. 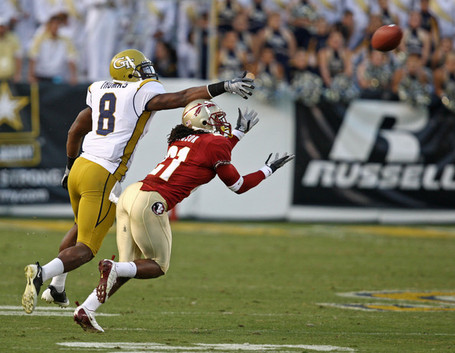