Here we are at #18 in the 2010 BTSC Community Mock Draft. The Pittsburgh Steelers first round draft position this year. Many thanks to EnglishSteelerGotBanned for the selection - one I'm sure a lot of you would be just fine with were the Steelers to sit pat next Thursday and not move up. Onward we go. It's going to be close, but we've got an outside shot at getting through all 32 teams if we keep this nice clip up. The Atlanta Falcons at #19, represented by BluegrassSteeler. - Michael Bean -

With the uncertain situation in the Steelers defensive backfield, with the possibility of a less impactful Troy after his bad knee injury and an aging group of FS's, we need youth and star potential at the FS position. Earl Thomas who has the ability to play bot FS and CB will be able to contribute immediately because he can play in the nickel and dime while learning the defensive scheme here in Pittsburgh. Then hopefully after a year learning the system he can replace Ryan Clark and become a starter and be the dominant cover safety so that Troy can safely roam and do what he likes without worrying about the deep pass. 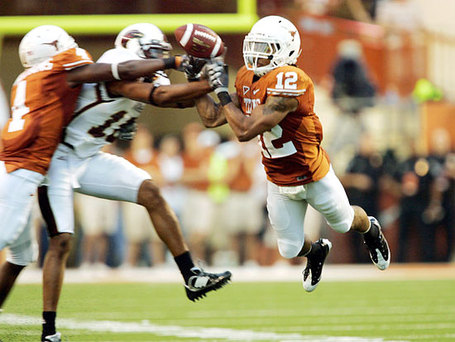 If it turns out he is best suited to play CB, then we also need him there, we currently have a number 1 and a number 3 corner (Ike and Gay) and 2 unproven rookies aswell as a few decent backups. We can plan on having one of last years rookies being a solid number 2 of the future but after Ike leaves to FA in 2011 then we need a #1 CB or a #2 if the rookie proves to be worth the gig. Of course the team also could have our 2 rooks from last year become viable starters, but I see that as a long shot as it is likely one will fail.