Many thanks to one of the many folks I enjoy reading when he/she has time to contribute. That'd be BluegrassSteeler, checking in with the Atlanta Falcons pick here at #19. Next up? The Houston Texans at #20, represented by sctx109. -Michael Bean- 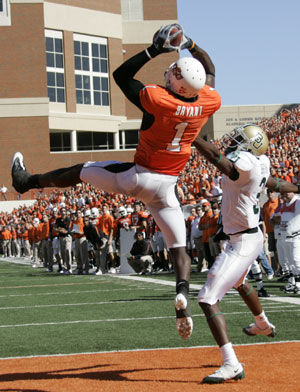 The Falcon's find themselves in a very enviable position here. They would like to beef up their defense (especially they're pass defense) and there are a number of players that could help them out.

CB Kyle Wilson is tantalizing. He could immediately aide the overall depth of the secondary (and lets be honest, you need at least three good CB's if you're going to compete with Drew Brees twice a year). However, the acquisition of Dunta Robinson makes it unlikely that they would take Wilson here.

If Earl Thomas had been available he would have been tantalizing in this spot. Ball hawking safeties that can play corner in a pinch are a rare and valuable commodity in the league. He went just above them though, so he's off the board.

This leaves us, more or less, with pass rushers. Jason Paul-Pierre is gone - it's what they expected. As is Derrick Morgan - again, no surprise there. However, Michigan product and alleged LaMarr Woodley clone Brandon Graham is still on the board. And with the 19th selection of the 1st round the Atlanta Falcon's choose....Dez Bryant, Wide Receiver from Oklahoma State?

What's going on here? Don't the Falcon's have a great offense with a very underwhelming defense?

Don't they already have a #1 receiver in Roddy White and a great pass catching TE in future Hall of Famer Tony Gonzalez? Why would they pick a WR with their 1st round selection?

Why? Because Dez Bryant is just that good folks. He's a legitimist Top-5 talent in this draft who - for reasons that are most mysterious to me - has slipped in this particular mock. While the Falcon's biggest need is obviously on the defensive side of the ball, the obvious value - perhaps the best value in the 1st round - is with Bryant, who draws favorable comparisons with Larry Fitzgerald.

Bryant is the ultra-strong, big-bodied type of receiver that can go up and catch any ball thrown his way. Given his size, incredible hands, and physical style of play he'll be a threat in the red zone that rivals that of Fitzgerald.

Character concerns? Compare to many WR's - like our former Super Bowl MVP - Bryant is a boy scout. His suspicion this season was due to a lie he told the NCAA involving his relationship with Deon Sanders. Keep in mind that his relationship with Sanders broke no NCAA rule itself; he thought it mind, panicked, and tried to cover it up. Not exactly a guy who tweets his intention to "wake n' bake" after failing his 3rd drug test. Bryant's character concerns are overblown to say the least. If you learn a bit about the kid's background, you'd understand how amazing it is for him to be in his current position.

Not to mention the Falcons have a franchise QB in Matt Ryan (Matty Ice!). Even though their defense is needy, I don't think you can pass up a brand new weapon for your franchise QB in a player like Bryant. How do you defend White, Bryant, and Gonzalez while also respecting the run? It's going to be really difficult - which is why Michael Turner would love this pick as well. Michael Jenkins has been a huge disappointment - even as a #2 or #3 receiver - and this move would allow them to cut him loose.

So, again, why Bryant instead of someone like Graham? Why WR in the first place? The Falcon's only real rival in the division this season will be the Saints. Now, to beat the Saints you can go a couple of different directions. One way is to beef up your pass rush and coverage units. However, Brees never takes sacks (or very rarely does) and rarely throws interceptions - he's careful decision maker that rarely makes major mistakes, even when rushed.

The other way is to fight fire with fire. That is, to build an offense that can hang with the prolific passing game of the Saints. Run up the score on a suspect Saint's defense and force Brees into tough/questionable decisions in his attempt to keep up. The league is all about scoring through the passing game, and Bryant would allow the Falcons to have one - if not the - most dangerous passing game in the NFL. The combination of Ryan, White, and Bryant could be as deadly as the combination of Warner, Fitzgerald, Boldin was a couple of years ago. Considering the Falcons also have a great running back in Michael Turner, this offense could be even better.

In other words, the value is simply too great to pass on Bryant at this juncture. This is a deep DE/DT/CB/S draft and they can find good players in the 3rd and 4th rounds. But they're very unlikely to find a WR the caliber of Bryant at any other point.