Now we're cooking with gas. Great stuff from you all here getting the picks in quickly and doing such a bang up job with them. I've always thought our little mock draft - while perhaps not entirely accurate - is always one with the some of the best and thoughtful writeups. Many thanks to sctx109 for the latest. Cheers. Next up? The Cincinnati Bengals at #21, represented by WillieSlizzick. - Michael Bean -

In winning their final four games of the 2009 season, the Houston Texans finally got over that hump and achieved the first winning season in team history. However, though 9-7 was good enough to see head coach Gary Kubiak have his contract extended through 2012, it was not sufficient to get the Texans into the playoffs for the first time in team history.

In spite of the 9-7 record, a fair number of problems plagued the Texans throughout the year. First-year phenom Steve Slaton was exposed, and subsequently injured, when he was pressed into duty as a three-down back. His struggles, and eventual placement on IR, saw the Texans turn to Ryan Moats and Arian Foster, and the latter had a couple of impressive performances in the final two games. Nevertheless, while the Texans ranked 1st in passing offense at 290.9 ypg, they ranked a lowly 30th in rushing offense. This has led many in Houston to call for the selection of Ryan Matthews (RB- Fresno State). Matthews would allow the Texans to rely less on the arm of budding star Matt Schaub, thus offering him some protection, as well as help Coach Kubiak establish a more physical identity. However, while his one-cut running style would seem an ideal fit for the Texans' zone-blocking scheme, the Texans have more pressing needs elsewhere and the potential of the young ballcarriers on the roster, coupled with the availability of guys like Montario Hardesty or Ben Tate in later rounds would seem to dictate another direction.

Similarly, after the David Carr ordeal, finally finding a stud QB in Schaub would demand you find him some protection. With this in mind, the Texans selected LT Duane Brown last year to protect Schaub's blindside. Reading the opinions of some fans, he has been a mild disappointment (probably in comparison to Oher), but he also does not play in the easiest division to be a LT. It would seem too soon to take another OT this high, especially when RT Eric Winston is quickly becoming one of the top players at his position. LG Kasey Studdard is a weak point, while RG Antoine Caldwell (a 3rd round pick in 2009) showed some potential. The C Chris Myers is above average, especially within a zone blocking scheme, but the Texans could use depth across the line. Maurkice Pouncey (C/G Florida) could be an option here; however, given the need for smaller, more athletic lineman in a zone scheme, quality depth that can push for playing time can be found later. After all, the Texans OL did only allow 26 sacks last year, good for 5th lowest in the NFL (for Steelers fans at home, that was almost half our total).

That brings us to the defense, and where this pick will need to be. In spite of playmakers like Mario Williams, DeMeco Ryans, and Defensive ROY Brian Cushing, the Texans were 18th in passing defense (217.9 ypg), 23rd in points per game (24.2 ppg), while only accumulating 27 takeaways and 30 sacks (25th in the league). In a division where putting up big numbers on offense is important, and being able to defend the pass even more so, the Texans went 1-5, costing themselves a shot at the postseason. They have a strong DL, led by the aforementioned Mario Williams, along with ex-Cardinal Antonio Smith and former 1st-rounder Amobi Okoye. However, their best NT for most of the year was Jeff Zgonina (yes, that Jeff Zgonina). He will be 40 in May, and for that reason, the Texans have an interest in both Dan Williams (NT- Tennessee) and Brian Price (DT- UCLA). In particular, Price's ability to be stout at the line of scrimmage as well as rush the passer could be a nice fit.

However, now that their best CB Dunta Robinson has left to sign with the Atlanta Falcons, this is the CB crops at present: Fred Bennett, Jacques Reeves, Glover Quin, Antwaun Molden, and Brice McCain. SS Bernard Pollard was quite the find last year, but they still are relying too much on the ever-injured Eugene Wilson. Given the local connections, they would love to be able to select Earl Thomas (FS- Texas).

However, that is highly unlikely, which makes this pick Kyle Wilson (CB- Boise State). He's fast, athletic, fluid, experienced, and very confident. When you need to beat Peyton Manning to win your division, then you need CBs that are not only physically gifted, but also quite instinctual. Wilson does have some troubles in zone coverage, but he can work on those while helping out in sub-packages and utilizing his athleticism to cover guys in the slot like Austin Collie. More importantly, he brings a playmaking dimension that the Texans' secondary is solely lacking. To my mind, the way he plays is very reminiscent of Dunta Robinson and, hopefully, his success will have fans forgetting about him in no time. 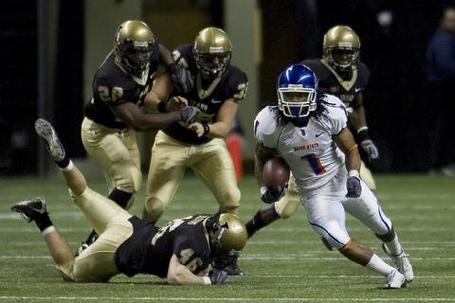 (Note: were Kyle Wilson to be gone, it seems Kareem Jackson (CB- Alabama) is quickly moving up draft boards because of his athleticism and the perception that he can help out right away. Given the Texans' need to win right away, he could end up being the pick even if Kyle Wilson is still on the board.)