Nice, I was concerned we might not hear from WillieSlizzick with the Cincinnati Bengals pick at #21. I was wrong. Not only did he get the pick in fairly quickly, I happen to like the pick a lot. In fact, I had Gresham cued up as the player I'd select in place of him if he were not to show up. Anyway, many thanks for this as it keeps us on track to most likely finish this puppy off before the real deal transpires on Thursday evening. Next up? The New England Patriots at #22, represented by JonnyNYC.  - Michael Bean -

Following a 10-6 season the Bengals need another weapon to get them over the hump. Jermaine Gresham from Oklahoma will be a very good selection to bolster their offense and give QB Carson Palmer a solid TE to check down too.  Gresham I feel is the best red-zone target in this draft also has a pair of the best hands. Gresham missed the entire 2009 season because of a major knee injury after bursting onto the scene in '07 with 11 touchdowns. 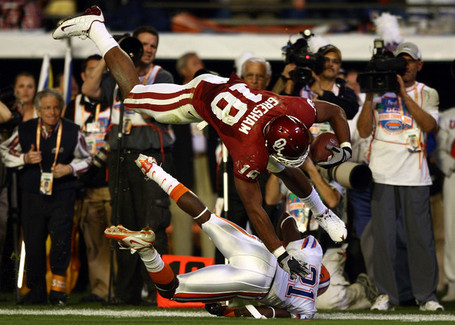 As a junior in '08 the imposing playmaker once again sparked the Sooners offense pulling down a team-leading 14 grabs in the end zone. Rookie tight ends rarely make a significant difference their first year. But he's the kind of complete talent who will endear himself to teammates as he provides a huge safety blanket for his QB, demands attention away from defensive backs double-covering the receivers and helping open up holes for the RB. He should allow OchoCinco, and the rest of the Bengals receiving brigade to get some openings that they haven't had an oppurtunity to get in recent years.

Gresham is the complete package and has the skills to be a three-down player. He's like fellow Big 12 TE Brandon Pettigrew in that he possesses rare blocking ability. Besides stretching the field and creating mismatches wherever he takes his 6'6 frame he also serves as a sixth offensive lineman strengthening the running game as well.