IX-Jerome "The Bus" Bettis just threw his former quarterback under the proverbial "bus" in a recent interview on the Dan Patrick Show.  Bettis was candid and honest with his assessment of the Roethlisberger situation and also has some opinions about Terry Bradshaw and former Stanford running back Toby Gerhart. 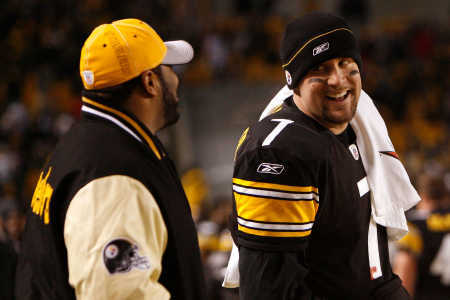 X-Today's daily Big Ben rumor mongering starts with Yahoo Sports reporting that Ben Roethlisberger will receive word by tomorrow that the league and the Steelers decision on whether he will be suspended.  Besides that rumor there are a variety of reports from footballTMZ profootballtalk about how the Steelers are still open to trading Ben, and how the Millidgeville Police Department botched the case against Roethlisberger by not properly sealing of the "crime scene" after the incident.  Just a few hours ago the story has changed and now the new rumor is that the punishment for Big Ben will not be announced until Wednesday, and that if the punishment is "too harsh" he might look to appeal the decision.

XIII-Golden Tate has drawn comparisons to Hines Ward and now he has stated his desire to play in Pittsburgh.  It sounds like a wonderful idea, but unless Pittsburgh trades down and into the late first round or if Tate falls into the second round and Pittsburgh decides to trade up there to get him I don't see the Steelers being in a position to draft the former Notre Dame standout.  The other problem I see with drafting Tate is that Pittsburgh will still be missing a true number one receiver since Tate likely will play more of a possesion reciever type roll similar to Hines, while Pittsburgh might of made a smart move with the Santonio trade in the long-term the short term effects of this move could be brutal in the 2010 season.

XIV-An interesting statement popped up on the Steelers official website by struggling receiver Limas Sweed.  Limas was placed on the reserve/non-football injury list at the end of last season for reasons that still have not been fleshed out.  Prior to the trade of Santonio Holmes I didn't see a roster spot available for Limas Sweed, but Holmes departure has opened up one last chance to cure his nasty case of the drops and live up to his 2nd round potential.  Its also a positive sign that Limas Sweed actually wants to be a Steeler because I had heard an rumor from a source that stated that Limas wanted out of Pittsburgh and preferred to play in his home state.

XL-ESPN is asking you to rank who is the greatest Steeler of all time, the list includes many of the greatest Steelers.  Currently "Mean" Joe Greene is the top vote getter, but Terry Bradshaw is only a few votes back.  Not surprisingly Ben Roethlsiberger remains at the very bottom of the list of players that ESPN developed.  Is it just me or did the comments Terry Bradshaw made last week really help re-establish a more positive memory of him as a Pittsburgh Steeler.  For many years after he retired their was a lot of tension between Bradshaw and the Steelers, and it seems his one comment ripping the current troubled quarterback has made him the king of Steeler Nation again.

XLIII-After his injury at the beginning of last season many in Steeler Nation counted Will Parker out for good.  In fact the Pittsburgh Steelers did as well and allowed Parker to hit the open market where he signed a one year contract with the Washington Redskins who already have a crowded backfield with two pro-bowl running backs in Clinton Portis and Larry Johnson.  The word coming from the Washington Post is that Parker is saying all the right things and looks ready to complete for carries in a backfield that would have been astonishing in 2005 but currently looks mediocre.