Happy Monday everybody. It's the week of the 2010 NFL Draft, a big hurdle to clear in the long wait for the return of NFL football. Many thanks to JonnyNYC for the prompt and humurous pick here at #22. Next up? One of BTSC's favorite high school football coach from New Jersey, cliff harris is still a punk!. - Michael Bean -

Great options here for the Patriots with three highly rated values still on the board for them.

Knowing this the Pats would likely try to move back a bit on Thursday and pick up another pick or two, though if that draft follows this one (very solid draft so far here) it doesn't appear too many players have slid tremendously to where the Pats would get better value moving the pick vs keeping it and making a selection.

Since we can't trade picks in this lil format anyhoo, Odrick is the guy for the Pats. At 6-5 and 308 he has the frame/agility combo the Pats require from their DE's and sorely lacked after moving Richard Seymour. In fact, Odrick is a near perfect selection to replace Seymour. Consider:

- Odrick is within 1" and 5lbs of Seymour's frame
- Both played DT in college and will convert to End in the NFL
- And most importantly....I mean they look very, VERY similar to each other: 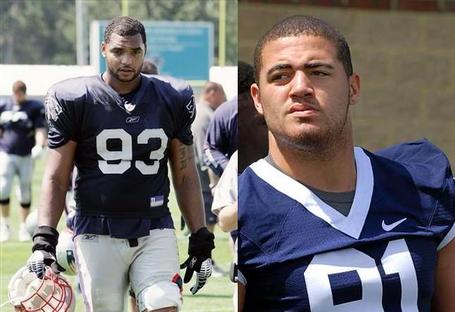 But I digress. They may not be the exact same player, but I ask you to prove Odrick is not Seymour's doppelganger.

It's an eerie pick, and one with good value for the Pats.