We're rolling along nicely here to start the week. Good stuff and many thanks to all of you who have gotten me their selections and writeups so promptly. The latest comes from cliff harris is still a punk! Not surprisingly, he's done a bang up job with it. Bravo. Next up? The Philadelphia Eagles at #24, represented by Ironpete0827. -Michael Bean-

There are two ways of approaching a community draft like this. One is to think, "If I were the GM, who would I select here?" The other is to attempt to select the player that, given the way the draft has unfolded, you believe the organization would actually go for. I'm going to take the first course because, frankly, it's more fun. I don't believe for a second that the Packers will pick this player, and I'm sure there will be some complaints about it. But for me, University of Michigan DE/OLB Brandon Graham is the way to go. Here's why: 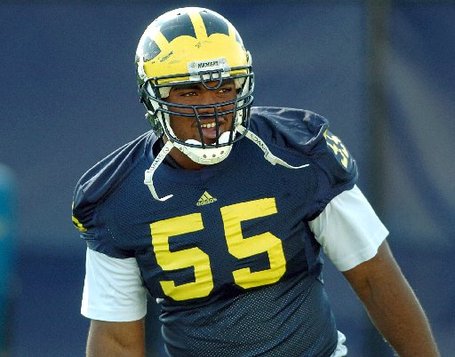 I love defense. I grew up with a shrine of Lambert posters on the wall of my bedroom. When I was playing football I tried to model myself after Ronnie Lott and my current favorite Steelers are Polamalu and Woodley. I like the physical nature of playing defense and the attack mentality that it fosters, and I still believe that, even though the league has become so offense-oriented, good defense is essential to success. I especially like the idea of getting after a quarterback and making his life as miserable as possible. A comfortable QB is a successful one, and an uncomfortable one (think Tom Brady vs. the Giants in SB 42 or Peyton Manning vs. the Steelers in the '05 playoffs) is far less so. That said, the Green Bay Packers need to make life more miserable for opposing quarterbacks. Kurt Warner didn't look very miserable when his Cardinals hung 51 on the Pack in their playoff game in January, and Big Ben certainly didn't look miserable when he threw for 500 yards against them in December. And since the Packers have converted to the 3-4 defense, the primary job of making life miserable on the quarterback falls to their outside linebackers.

As we all know well here in Pittsburgh, having a stud NT and some rabid OLB's make the 3-4 go. The Harrison/Woodley duo is misery personified for opposing QB's, and if the Packers want to shore up a defense that was perhaps a bit soft in big spots last year, they'd do well to follow the Steelers recipe. Last year they struck gold by selecting USC outside backer Clay Matthews in the first round, and this year they have an opportunity to land his counterpart on the other side. Although he's not projected to go until the 2nd round by most draftniks, Brandon Graham is that guy. He's got Woodley size, strength and demeanor and his motor is always running. He had 30 sacks for his college career against top-level competition and he lit up the Senior Bowl by dominating NFL-quality o-linemen. He'll have to adjust to playing without his hand on the ground, which is probably why teams see him as a 2nd round pick and not a 1st, but so did Woodley. Every scouting report you read about the guy includes these descriptions: "Intense." "Physical." "Relentless." The best description of all? "Playmaker." This is exactly what you want out of those 3-4 backers. Criticisms of Graham include things like "too short" (he's 6'1) or "doesn't have a large wing-span" (James Harrison, anyone?). I'll take a playmaker with a relentless motor over a guy with a big wing-span any day. If I were Green Bay, I'd jump at Graham at #23 and bookend him with Matthews. Then I'd tell them to dedicate themselves to punishing Brett Favre into retirement (finally) and taking back the division from the Vikings.

The conventional wisdom says that the Packers need help at OT and CB more than at OLB. This may be true, and there are still some highly ranked OT's on our mock board. I don't think any of them will be better pro players than Graham, though. Of the OT's, Maryland's Bruce Campbell looks like Tarzan but plays like Jane, Rutgers' Anthony Davis has poor work habits and is highly undisciplined and USC's Charles Brown, a converted TE, is still learning the position and won't be pro-ready for a few years. As deep as this draft is, the Pack can find tackle help in a later round. As for the corner spot, they definitely need depth behind 30-somethings Charles Woodson and Al Harris. But the best CB's on the board at this point -- Devin McCourty from Rutgers and Kareem Jackson from Alabama -- seem less worthy of the #23 spot than Graham does. This draft is deep with corners as well.

In the end, the Pack will probably take one of the OT's because they value keeping Aaron Rodgers safe more than anything. But the 51 points they gave up in their playoff loss and the 500 yards passing they surrendered to the Steelers should tell them to value great defense, too. If Brandon Graham can play anywhere near the level of his ex-Michigan counterpart Mr. Woodley, it would be a huge step toward making that Packer D great.