IX-The Steelers signed two players to their off-season roster, a wide receiver and a punter.  Brandon London was an undrafted free agent receiver that signed with the Giants in 07' and played sparingly last season for the Miami Dolphins.  The other player is punter Adam Graessle, who spent last season the Packers.  Graessle is likely nothing more than a camp leg, and while London has the size (6'4) to be effective in the league it is rare for a player like London to not find a team after two season if he was truly a talent.

X-Kevin Colbert and Mike Tomlin addressed the media yesterday after the first day of Organized Team Activities, and the Tribune Review was kind enough to transcribe the press conference on their website.  The presser touched on a variety of topics from Ben to Limas Sweed, and Coach Tomlin as usual was terse and to the point in what the expected the players, coaches, and front office to get out of OTA's, and Tomlin also denied the report that he drilled down a new "Zero Tolerance Policy" in regards to off-the-field conduct that was reported yesterday by multiple sources.

XIII-Steeler Depot has posted two rumors that I have not been able to confirm, one is useless info and they other is possibly interesting.  The useless info is that Quarterback Dennis Dixon has switched his number from "2" that he wore with the Steelers during his first two seasons to the number "10" now that Santonio Holmes is no longer a Steeler.  Dixon wore the number "10" while he was in college with Oregon.  The more interesting nugget is that the Jets are actively shopping Alan Faneca and if they don't find a suitor they will release him.  I don't see the Steelers making a move on Faneca in a trade due to his hefty contract but I could certainly see them making a play at him if he ends up being released.  UPDATE:  Here is some confirmation on the Faneca Situation. 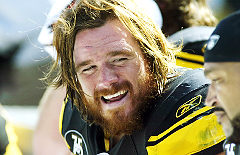 XIV-Ed Bouchette ranked the top players at all positions in the 2010 draft on Sunday for an article in the Post Gazette.  If you have hung around BTSC long enough you know some of my feelings on Bouchette, but it's undeniable that he is one of the most well-respected beat writers that covers an NFL team for a national newspaper.  Not much surprising in his rankings excepts having Tim Tewbow ranked higher than Colt McCoy in his QB rankings.  although Bouchette seems to be very down on both players.

XL-One player you might of noticed that was left off of Bouchette's rankings of draftees was last years Heisman Trophy runner up Toby Gerhart who only 1,871 yards and 27 touchdowns last season.  Yahoo Sports' Michael Silver profiled Gerhart for a recent article and looked at whether that fact that Gerhart is white is a position that is dominated by African Americans is playing a role in his draft stock continuing to fall.  James Walker of ESPN North pointed out today that Gerhart's physical running style makes his a quality fit for any of the four AFC North teams.

XLIII-Cotter from One for the Other Thumb is know for having one of the best Steeler blogs on the web with great content, photo-shops, and commentary usually with a humorous slant.  Today's post from him on the repercussions the league will face might be one of his best, and is certainly a must read for anyone who isn't completely exhausted by all the talk and debate about the looming Big Ben suspension.