Share All sharing options for: 'Another Side Of The 2010 NFL Draft'

The following is a smattering of interesting tidbits about the players and schools that will be represented in the 75th NFL Draft to be held Thursday in New York City. 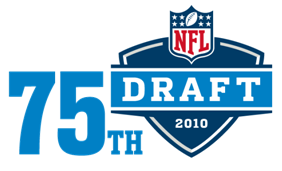 At 33, Crawford was older than five of his assistant coaches in his senior season! Following a windy road that included several years of work at an automobile plant and a five-year stint in the Marines, Crawford thinks he has what it takes to play professional football.

"I believe I have a shot at getting drafted," says Crawford, who received an honorary discharge from the Marine Corps in 2003. "If you turn on the film, it doesn't lie. My age might make some people put a blinder on, but I think you've got to see the film first."

Crawford, who initially enrolled at Ball State in 2004 and earned a bachelor's degree in criminal justice in 2008, totaled 138 tackles and 15.0 sacks during his college career, starting his final 39 games.

The five oldest rookies to appear in an NFL game (non-kickers and punters):

12 TIDBITS: A dozen interesting notes on the draft class of 2010

FAST FIRST ROUND:  Last year’s first round was completed in three hours and 23 minutes, seven minutes shorter than 2008 and roughly half the time of the first round of the 2007 draft, which took six hours and eight minutes.