IX-In his earlier post this morning our fearless leader Michael posted the fiftieth through twenty-sixth top draft picks in NFL history as compiled by NFL network.  Last night the NFL Network managed to put out a pretty entertaining video in between schedule coverage and their incessant t ramblings about every possibly scenario that won't actually happen to Big Ben.  The video is an interview with Mike Mayock and current Patriots head coach Bill Belichick talking about how Jack Lambert has the Rolling Stones to thank for his playing time at Kent State.  I certainly despise Belichick for a variety of reason but this was one of the few times I have seen him speak where I actually saw that he had some sort of personality. 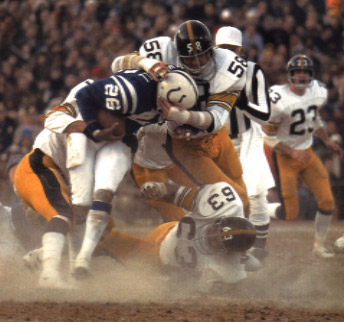 X-I have stated more than a few times that I was nervous about what to expect from Mike Wallace this upcoming season even prior to the trade of Santonio Holmes.  Now the expectations are much higher and realistically Wallace will go from lining up against third and fourth DB's to this season lining up against a lot of teams number one cover man.  With Hines Ward not getting any younger and with Wallace's blazing speed it would be surprising if players like Darrell Revis won't line up against Wallace.  Having stated my concerns today's article in the Post Gazette really goes a long way to show the Wallace is looking forward to and preparing for his increased role.

XIII-I let this one slip through the cracks but Post Game Heroes caught an interview on ESPN a few days ago with Todd McShay where he stated that if knowing what we already know about Limas if he was entering the draft he would be the third or fourth receiver in the draft behind Dez Bryant and Golden Tate.  They go on to analyze what this means, but what it means to me is this must be the *#%$&*# draft for wide receivers in the history of the world.  My wishes and hope for Limas this season?  50+ catches for at least 700 yards.  My fear for Limas this season?  He ends up buried on the depth chart of some other team after being released during final roster cuts.

XIV-Another article I missed the boat on last week was from Dale Lolley's excellent blog "NFL From the Sidelines."  He caught up with Charlie Batch at one of the charity basketball games that they are playing around the area.  I will let you read the article and won't give much commentary, but from the tone that Charlie had answering those questions you would of thought someone had kicked his puppy or something; which certainly isn't what he normally projects in the media.

XL-NFL football is king in the USA as evidence by the NFL's decision to go up against the World Series this season with Sunday Night Football directly competing for viewers when the Steelers and world champion New Orleans Saints match-up against each other. Hell, with the Pirates are off to a hot start  (Second in the NL Central and an above 500 record 9 days away from may), us Pittsburgh fans just might have to choose whether to watch the Bucco's in the world series or the Steelers bruise up the Saints.   Anyways, let's support our fellow Pittsburgh teams with the Pirates playing O.K. ball and the Penguins about to finish off the Ottawa, there is no better time to check out Bucs Dougout and Pensburgh.

XLIII-ESPN gives a nice profile on Dennis Dixon and what the Steelers have done to provide depth since they will likely be losing their starting quarterback for multiple games this season.  I am actually really excited to see Dennis Dixon play this year and will be very disappointed if he isn't given the opportunity to start, he has value to either the Steelers or another team in a few years and he is an electric and fun player to watch.