Wow, what an offseason. The crazyness continues to day with the news of Ben Roethlisberger's six game suspension by the NFL for violating the league's personal conduct policy. I have been running around all day and unable to properly write my thoughts on the matter, but that's coming soon. In the meantime, onward with a few picks in our Community Mock Draft. We've got an outside shot at still finishing up by tomorrow afternooon, so fingers crossed. Anyway, thanks to TheAngelsColts for the pick here. He himself is busy getting ready for the draft so no writeup, but by now you've probably heard a thing or two about Pouncey, a mauling center who could very well end up with the Steelers come Thursday night or Friday morning. Next up? The San Diego Chargers at #28, represented by Justin Azevedo. - Michael Bean - 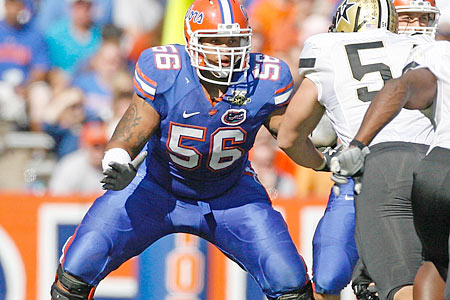 Awareness/Reaction: Even though Florida ran a true spread offense, Pouncey showed he can block on power and finesse plays. He's a very experienced player who started since his true freshman year at Florida. Doesn't get thrown off by defensive line shifts or when linebackers show inside pressure pre-snap. Made all the calls for the Florida offensive line.

Balance: Maintain an excellent base against defensive linemen who are equal to or less powerful than him. Doesn't let linemen get under his pads often. However, stronger nose tackles have given him problems in the past.

Initial quickness: Fires off the snap incredibly quickly. Sets with ease and doesn't take false steps in his setup. Gets his hands moving immediately and doesn't give up much to linemen.

Movement/Space: Wasn't required to move around a lot in the Gators' line scheme. Based on his combination of quickness and awareness, Pouncey shouldn't have a problem in this area, though. When he's help blocking, Pouncey doesn't get in the way of a teammate, and is a great complimentary piece.