We're moving right along here now, as the #29 pick for the New York Jets is in. About time Iupati gets taken off the board. Many thanks to BlackandGold for the pick. Next up? The Minnesota Vikings at #30, represented by one of BTSC's longest tenured members, Chicago Steeler. - Michael Bean -

So, we've all heard about the New York Jets. First they trade for All-Pro CB Antonio Cromartie from the Chargers. Then, they sign LaDainian Tomlinson to help out Shonn Greene in the backfield. And to the irk of many faithful Steelers fans, they trade for Santonio Holmes for a 5th round pick. Oh, and just this very morning they signed Jason Taylor to a two year deal, helping out their poor LB corps. Now, WHO ON EARTH COULD THE JETS POSSIBLY WANT?!

Of course, this means that they can sit back and watch the chips fall to them and simply take the best player availible. As they sit back in their draft room, they see two players of interest slip and fall out of the hands of many teams.

And, with the 29th selection of the draft, the J-E-T-S select: 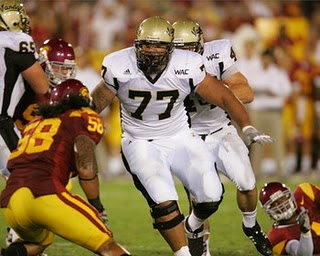 As the draft nears, there are rumors that the New York Jets will release Alan Faneca because, let's face it, he didn't really deserve to go to the Pro Bowl this year. With the Jets, everything is built behind that offensive line. There weren't the number one rushing team in the league because of luck. Iupati can be a Day 1 starter for them at guard, as he shows some monster run blocking skills with good hands and quick feet in pass protection. The only knock on him is that he's a bit slow, but that can easily be rectified with some intense training, which he seems more than willing to do. He brings a nasty streak that Rex Ryan so dearly covets of his team.

If they J-E-T-S JETS JETS JETS decide on shoring up their defense, a route that theyl'l likely take is Sean Weatherspoon, OLB, Missouri, but I'm putting my money on Iupati. Even the name sounds awesome. Say it with me: