Almost home. Two picks away from rounding out our 2010 version of the BTSC Community Mock Draft. Good work by all. Thanks to Chicago Steeler for the latest. He's been a participant in the first three of these that we've done, so good to see him do so again this year even amongst his busy schedule. I'm subbing in at #32 so that just leaves us with the Indianapolis Colts at #31, represented by barnerburner. - Michael Bean -

The Minnesota Vikings sold their sold to Brett Favre to win a Super Bowl and that deal darn near payed off. On offense they are explosive all around. Sidney Rice came on to the scene in a big way in 2009, making me hope that even Sweed could break out this year, Percy Harvin was an electric rookie that was dynamic with the ball in his hands, and Peterson... Well Peterson delivered one of the best hits I saw last season against Willie Gay. The O-Line is in decent shape but could stand some improvement. QB will be an issue soon enough with Old Man Favre needing to spend more time with his Levis.

The defensive side of the ball remains ridiculously stout against the run. Linebacker is starting to become a point of concern and the Williams brothers up front are starting to show some age. However the real weakness on the defense is the secondary. Winfield is a playmaker, but otherwise it looks like a bunch of schmucks. They have a solid pass-rush with the mullett-man up front diving at every QBs knees, but without someone covering in the backfield they give up too many big plays. 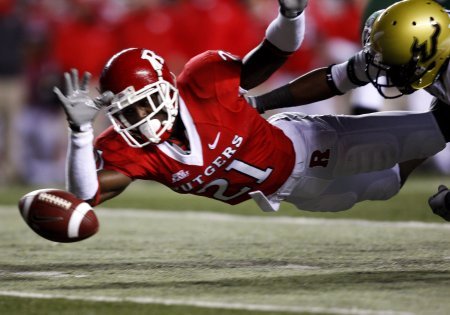 With the 30th selection in the 2010 draft the Minnesota Vikings take: Devin McCourty CB from Rutgers.