31 down, 1 to go before the 75th NFL Draft commences tonight. Many, many thanks to barnerburner for the pick at #31 for the Indianapolis Colts. As comprehensive and thoughtful a writeup as any we got this year, so thanks. That leaves me at #32 picking for my second favorite NFL team, the defending champion New Orleans Saints. - Michael Bean -

Bill Polian goes best player available. Always has, always will. He said it again yesterday in his pre-draft press conference.

"Our philosophy in the first round - this is repetitive you could've written this every year - we follow it pretty religiously: we're going to take the best football player available to us, regardless of position," says Polian. "When you reach for need, or you reach for the perception of need, I think you make a mistake. We're looking for the best football player we can find. And if it happens to be at a position where we have other good football players, that's okay too, we'll sort that out after the fact. You can never have enough good football players and you can never have enough difference makers."

As I was watching the last few picks of this community mock draft unfold the past couple of days, I was stoked to see a guy like Sean Weatherspoon, LB from Missouri slide right into my lap.
From CBSSports.com:

"Just the third player in Missouri history to lead the team in tackles three times in a career, Weatherspoon's 413 career tackles rank third in school history and 10th all-time in the Big Twelve Conference. His 155 tackles in 2008 rank second on the Tigers' season-record list, placing seventh on the league's annual record book, while finishing fifth nationally that season [barnerburner's note - Consensus seems to be that his junior campaign was better than his senior year, though his senior numbers are nothing to sneeze at either].

While his tackle totals stand out, there are other aspects of his game that make Weatherspoon rank with the elite at his position in college football. His 12.5 sacks rank 13th in school history [barnerburner's note - For real? That's awful. But upon further examination of the issue, Ziggy's 15.5 sacks are tied for 7th all-time at Missouri according to his Steelers.com bio so I shouldn't be so surprised], as 10.53 percent of his tackles came from behind the line of scrimmage (43.5). Six of his seven quarterback pressures either came on third-down snaps or caused interceptions. Five of his nine forced turnovers led to Missouri scores, including two interceptions that he returned for touchdowns."

The man is a good football player, a gamer, a difference maker. He's a guy that most mocks expect to go earlier, and in a few hours I fully expect that he will go earlier. Weatherspoon would be a true Polian-type pick since LB isn't one of their glaring positions of need that are usually brought up for their first rounder. But that being said, in this mock draft, the Indianapolis Colts are not selecting Sean Weatherspoon.

Curveball much? Doubt it, because Blitz has the real pick in the title. I'd just put together this stuff on Weatherspoon before realizing that someone arguably better was still on the board, and it seemed a shame not to use any of it.
With the 31st pick in the 2010 NFL Draft, the Indianapolis Colts actually select Anthony Davis, OT, Rutgers.
I mean talk about serendipity. I was in the middle of writing my explanation for taking Weatherspoon over the likes of Charles Brown and Rodger Saffold - two guys at a "needier" position and popular picks for the Colts in other mocks - when I finally did a proper situation check and realized that somehow Anthony Davis was still on the board. In a very rare occurrence, it seems that the best player available also fits the Colts most glaring position of need, and Bill Polian finds himself in the unusual position of explaining why he made an anticipated first round pick.
Tony Ugoh's window to become the Colts LT of the future is but a sliver. The Colts moved up to take him in the second round, 42nd overall in the 2007 draft, giving up their first rounder in 2008 and a fourth to do so. He was pressed into action as a rookie following Tarik Glenn's unexpected retirement and had an up-and-down year, but I do remember Polian defending the trade a year later saying something along the lines of "in our scheme, Ugoh would still rate higher than any of the tackles coming out in 2008."

But in the years since, Ugoh unfortunately never did put it all together and develop to the next level, being benched this past season in favor of Charlie Johnson. Johnson isn't the long-term solution though, from what I gather they'd prefer him to be a jump-in-anywhere type backup similar to what Trai Essex was for us a year or two ago, and there was even some scuttlebutt this offseason about the Colts possibly signing Chargers LT and RFA Marcus McNeill to an offer sheet to try to fill the void.

Anthony Davis is pretty much the consensus #4 OT in this draft - behind the likes of Trent Williams, Okung, and Bulaga. Davis has had weight problems: he was 363 pounds when he first joined the Scarlet Knights and he was demoted to the second unit during training camp this past August for reporting in 5 pounds over his target weight or some garbage like that. There have also been some questions about his consistency and work ethic (he was a preseason All-American and Outland Trophy candidate but only managed All-Big East second-team honors from league coaches). He likely could've benefited from going back for his senior season and putting to rest some of those lingering questions, but even so his remarkable athleticism and solid workouts have solidified him as a guaranteed first rounder in most circles (Scouts Inc. rates him the 25th best prospect overall).

Here's another quote to note from Polian's press conference yesterday:

"Offensive line depth is something you look at, but my personal feeling is that - again, contrary to perception - this is not a terribly deep offensive line draft. The top guys will go off early, and then it thins out."

I was originally planning to spin that as reason to take Weatherspoon over Brown and Saffold - rating them as clear second-tier tackles that would be slight reaches in the first round, while Weatherspoon is clear first round talent. But now I'm spinning that as the Colts would be stupid not to take an athletic first round talent like Davis if he was available, especially when Polian doesn't like the second/third day depth of the position (assuming this isn't a smokescreen on his part, and it doesn't sound like one the way he led up to it and actually said it).

And one last quote, from when Polian was asked to address the speculation that the Colts are trying to get bigger, stronger, and more physical on the offensive line:

"I would say ‘no' to that. I've never said that. I don't know of anybody around here who has. We've not deviated one iota from our formula, which is that we need to be athletic, we need to be smart, we need to be physical. And I think we have players here who certainly fit that mold. They may not fit the mold of what other people think it should be, but they're fine by us. How many championship games have we gone to? I guess three or four and two Super Bowls, so it works okay for us. We've never felt like we've needed to get bigger or stronger. We're not that kind of team." 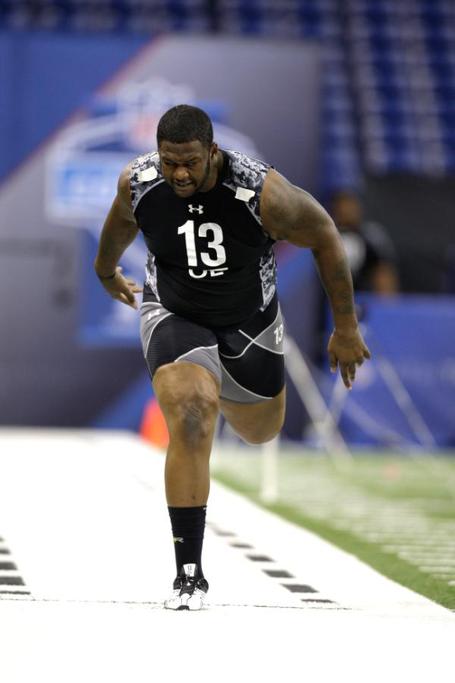 Now this sounds like a smokescreen. I'm no expert, but something about his stiffness at the start, his tone throughout, and the way his hands and arms were perfectly still during most of his response - compared to how emotive he is and how much he gesticulates during the majority of the press conference - my gut feeling is that the question definitely struck a chord and Polian's trying to will it away. I haven't been plugged into this so I had to look it up, and apparently the writing is already on the wall: a couple of guys who are bigger than former o-line coach Howard Mudd's usual mold were signed and according to long-time Colts guard Ryan Lilja and his agent, the organization told him he was being released because they wanted to move toward a bigger, stronger line.

In my typical verbosity, there you have it. Colts jump all over Anthony Davis if he's available.