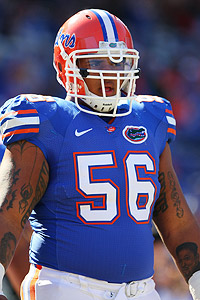 The wait is over. We finally have our newest member of the Pittsburgh Steelers - Maurkice Pouncey, the 6'4" 304 pound center out of the University of Florida. Early reaction from Steeler Nation seems to be mixed. There are those in the camp that love the pick, pleased that the Steelers have finally devoted a first round pick to an offensive lineman. Many in this camp believe that Pouncey has more upside than offensive tackle Brian Bulaga. Others though are left wondering why the Steelers didn't go after a cornerback, namely Kyle Wilson out of Boise State. I'm not one of those people.

Wilson may turn out to be a good player in this league, but to me, I think it's incorrect to state that cornerback is the position that needs most attention on the roster. That totally discounts the possibility of Keenan Lewis or Joe Burnett coming into their own in future years. That line of reasoning essentially states that the front office and scouting department blew it last year in their evaluations of the CBs they drafted. Way too early to write either of them off, or William Gay for that matter, regardless of how much he struggled. He too can be a better football player after some of the growing pains he endured last year.

I think all three of those guys will improve, particularly Burnett. Perhaps the Steelers could benefit from adding a CB in Rounds 2 or 3, but for now, I think the organization made a wise decision addressing the center position. I tip my cap to Justin Hartwig for his service in Pittsburgh these past three years. He's had his struggles, but I think it's fair to say that he's matched or even exceeded our expectations of him since he was signed. Is this the end of the road for him?

Not just yet most likely. The Steelers should be quite competitive this year and likely won't play Pouncey too much at the beginning of the season unless he just dominates in Latrobe. We'll see about that. More information on Pouncey soon but for now, count me in the camp of those who are pleased with this opening pick by Pittsburgh. There's as many as 10 more to go so if you're looking for something a bit more 'sexy' than adding a center, just be patient, your time may be coming soon enough.