Share All sharing options for: With the #52nd pick in the 2010 NFL Draft, the Pittsburgh Steelers select Jason Wirlds, DE, Virginia Tech

I am most certainly not surprised that the Pittsburgh Steelers didn't select a cornerback in the 2nd round of the 2010 NFL Draft. Never made much sense to me. Thought perhaps Pittsburgh would draft a safety in the 2nd round, but a flurry of them were taking early on in the evening, prompting the Steelers to address what I felt was the position that was next in line in terms of need - more youth along the DL.

The Steelers do just that by picking up 6'1" 254 pound DE Jason Worilds out of Virginia Tech. Obviously at that size Worilds might figure to be an outside linebacker. But he's also just a junior meaning he still has some growth to do physically. He could conceivably get up into that 275-285 pound range within a few years and be able to play along the line in the 3-4.

I don't know much about Worilds, but I will say this - if nothing else, this move signals Coach Tomlin & Co.'s seriousness about improving the special teams. There is no better program in America at making plays in special teams than Virginia Tech, so you can expect Worilds will be ready to go hunt heads on coverage units from day one. 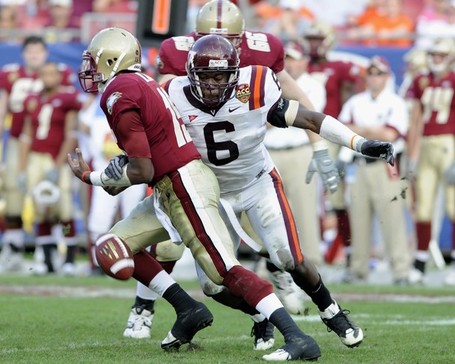 More on the most recent addition to Steeler Nation soon.