Share All sharing options for: How Jason Worilds Can Add Value To The Pittsburgh Steelers In 2010

Few thoughts from me on the Pittsburgh Steelers 2nd round draft pick on Friday - Jason Worilds, the DE from Virginia Tech that will almost certainly be converted to OLB in Dick LeBeau's 3-4 defense. 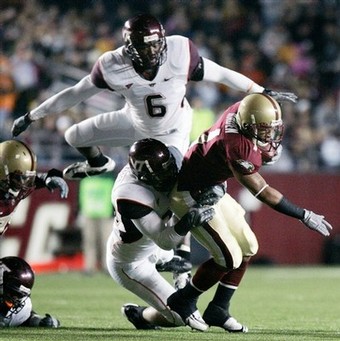 So, while this definitely seems like a 'project' pick, a pick that will hopefully pay dividends 2-3 years from now, don't underestimate what this kid can do in 2010. The Steelers needed to get a bit faster and nastier on special teams and on defense frankly. I'm legitimately stoked to see him head hunt on special teams, and I think this guy just may be a natural born football player and competitor that will find a way to do his job at a solid level.