Onward we go with the 2010 BTSC Community Mock Draft. Many thanks to seanachie for the timely pick and thoughtful writeup. I was away most of yesterday and unable to get this up as promptly as I would have liked to, but thanks for our first three participants for setting a nice clip to our mock draft so far. Next up? The Washington Redskins and FattyBoombastic. - Michael Bean (Blitz) -

No team in the NFL has a greater need for a single position than the Bucs' need for a DT. The Rams picked Bradford first, and that guaranteed Tampa a shot at either Ndamukong Suh or Gerald McCoy. Now that Detroit has taken Russell Okung, the Bucs actually get to choose. McCoy looks like a Warren Sapp clone, and no player in the history of that franchise has been more beloved. Suh has the better resume, and he was obviously the most dominant player on the field in pretty much every game he played in college. 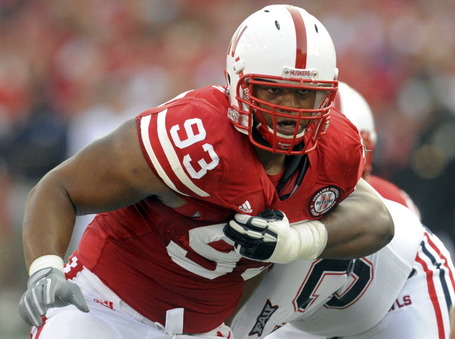 The Bucs select Suh because they can't pass up his once-in-a-generation potential. In his senior year alone he was First Team All-Big 12, Big 12 Defensive Lineman of the Year, Big 12 Defensive Player of the Year, a Consensus First Team All American and a Heisman Trophy finalist. He won the Bill Willis Award, the Lombardi Award, the Nagurski Trophy, the Bednarik Award and the Outland Trophy. He was also named the AP's Player of the Year.

Tampa Bay also owns the third and tenth picks in the second round. With Suh in the fold, they'll probably try to add a rush end and either a defensive back or a receiver, depending on what's available.