If Stefan Logan Finds Himself on the 53 Man Roster Come September, He'll Have Earned It

Share All sharing options for: If Stefan Logan Finds Himself on the 53 Man Roster Come September, He'll Have Earned It

Sponsored Post: This post is presented by Sprint. Bringing you the first wireless 4G network from a national carrier. Only on the Now Network. - Michael Bean -

I really don't like the fact that I've been relatively hard on Stefan Logan this past 9 months or so. His story is hard to not not like. Journeyman, undersized, persistent, scrappy. All those adjectives describe Logan and his quest to make it as an NFL player.

Logan in no way performed poorly last season for the Steelers. His 26.7 yards per kickoff return was good for 6th best in the NFL. He was less successful returning punts though, averaging just 9.3 yards per return, good for 13th league wide. He did almost break a couple kickoff returns, most notably an 83 yarder. But his long returning punts was just 25 yards. Only two other players in the top 20 in punt return average had a lower long for the year than did Logan.

Again though, Logan's season wasn't a disappointing one per se. Perhaps it just seemed that way after he exploded onto the scene last training camp and during the preseason when he returned multiple kicks to the house.  It's also worth noting that Logan made peanuts compared to many of his colleagues returning kicks around the league. If I recally correctly, he earned close to or maybe even a shade under $300 thousand, which is absolutely bottom of the barrel in the NFL. He should be commended for his contributions compared to what type of financial investment was made in him. 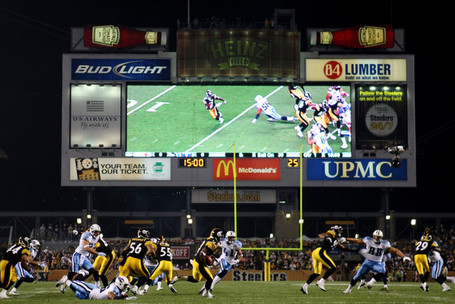 That said, I think Logan is going to be in a fight for his life..or rather, his job, come this summer. He has a number of players he'll have to fend off in order to keep his returning duties. The candidates most likely to compete for his job? Rookies Emmanuel Sanders and Antonio Brown, Joe Burnett, Mewelde Moore, and perhaps even Mike Wallace. Who knows, that list could grow to include others I've not considered or that may not even be on our collective radar yet (like Logan was last year around this time).

Let's go through some of those names I mentioned and jot down a few notes about the likelihood of them winding up with some return duties in 2010.

Mewelde Moore: Extremely unlikely he'll return even a single kickoff in 2010; the insurance he provides returning punts though might just help him keep his job this year. The team presumably will explore other more explosive options, but you can count of Moore being sent back to fair catch a few punts at various points in the upcoming season.

Emmanuel Sanders: Jim Wexell noted that Sanders looked unimpressive fielding punts in the week of the Shrine Game, so perhaps he's a less likely candidate to field punts than he might be returning kicks. Sanders' straight line speed is quite impressive though, so I'd imagine he'll get some looks at KR at Latrobe.

Joe Burnett: I think Burnett's future as a potential special teams contributor may be tied to his future as a CB in Dick LeBeau's defense. In other words, if Burnett proves to be an important nickel back that is playing 20+ snaps a game, I wouldn't expect him to be returning kicks where the most violent collisions all too often occur. I was very intrigued by the former 1st Team All American's abilities as a punt returner though and am hoping that he's one of the final few guys standing late in the summer for the job.

Mike Wallace: Given the situation at WR, I think it's safe to say that Wallace's energy and talents will be saved for playing offense. He's too important this coming year in the passing game to risk trotting him back there on ST. Who knows, perhaps as a KR, but not as a PR. If none of the other guys earn the job though, or rather, if someone else loses the job mid-season because of fumbling problems, maybe he gets a sniff back there.

Antonio Brown: Last, but certainly not least, Antonio Brown will have a chance to make his way onto the Steelers roster because of what he potentially brings to the Steelers return game. The two-time MAC Special Teams Player of the Year took five punts and kicks back for TDs in his career at Central Michigan. Like Burnett, Brown got to run circles around some inferior athletic talent in a mid-major, but I happen to think both he and Burnett possess 'un-teachable' instincts as return guys. That is, they have a knack for knowing where the seams will materialize a second or two before they do.

As much as I like watching Logan churn those short impressively stocky legs, I just don't think he has those same instincts.  For that reason, combined with the fact that Logan adds little, if anything at all, on offense, and I think it wouldn't at all be surprising if he was not in the black and gold just one year after setting the franchise record for return yards in a single season.