Great stuff here from FattyBoombastic with the Washington Redskins' pick at #4. Nice reasoning and write up. Well done. Next up? The Kansas City Chiefs and il_steeler_fan - Michael Bean (Blitz) -

Editor's Note: Well, well, well. The marriage between the Eagles and McNabb finally comes to a close, as Philly trades away their franchise quarterback within the division to the Washington Redskins. Of course, had we known this before the pick was submitted, surely FattyBoombastic would have gone in another direction. As is though, the selection of Clausen proved to be a prescient one, as the 'Skins clearly demonstrated their interest in upgrading at the quarterback position.

Editor's note #2: The selection has been changed to Trent Williams, OT, Oklahoma.

In the past the skins and owner Dan Snyder have been the quintessential "quick-fix" team, relying on big name free agents and splashy coaching changes to jump-start the team and try to win now with very little regard for the future of the franchise.

But in 2010 the Skins are seemingly taking a different path. Yes, the splashy coaching change happened, with Snyder giving the keys to the franchise (and bags full of money) to Mike Shanahan to come in and make the Redskins into a winner. Also gone is Vinny Cerrato and in steps Bruce Allen as the new GM.

So far in 2010 Snyder has taken a back seat to Shanahan and Allen. He is apparently letting them build the team as they see fit. The Skins stayed out of the initial free agent market and added some second tier players to fill holes after a roster purge that sent nearly a dozen players packing.

So with the 2010 NFL draft approaching the Redskins have a number of holes and a high pick at the 4th spot in the Draft. With a switch to the 3-4 defense the Redskins have needs at all levels of the D, but the biggest needs exist on the other side of the ball. The offensive line is terrible - the mediocre starters continue to get older and decline. The receiving corps is young (outside of Santana Moss) but they have not shown much yet. The running backs are old and need a speedy complement. And the quarterback situation is still a mystery with the franchise and the fanbase perrenially questioning whether Jason Campbell is the man to lead the franchise.

Russ Okung would garner consideration in this spot, but he's off the board to the Lions.

So, with the 4th pick in the 2010 BTSC Mock Draft, the Washington Redskins Select... Trent Williams, OT, Oklahoma 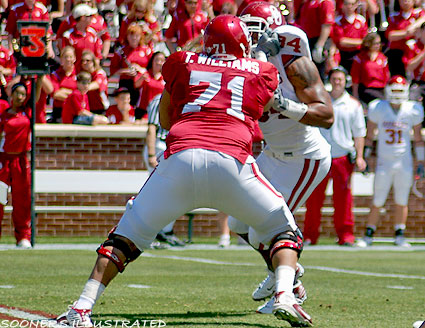 Mike Shanahan and Bruce Allen have no attachment to Jason Campbell. History also shows that Shanahan has not hesitated to select a Quarterback in the draft when the opportunity arose, even if he had an established starter. He selected Jay Cutler in 2006 when Jake Plummer had just led the team to a 13-3 record previous season.

If Shanahan, Allen and Snyder feel that Jimmy Clausen grades out as one of the top quarterbacks in the draft, as many people do, then I have no doubt that they will feel comfortable selecting the golden domer to be the face of the franchise for years to come.

Clausen shows tremendous accuracy, completing 68% of his passes as a Junior in 2009, and great decision making with an outstanding 28-4 touchdown to interception ratio. He has the ability to read defenses from both under center and from the shotgun formation. He is the most NFL ready quarterback in the draft having operated in Charlie Weis' pro style offense. Maybe most importantly, he brings the charisma, cockiness, and leadership that Jason Campbell lacks and Mike Shanahan loves.

While Clausen's arm strength has been questioned, he brings more than enough arm to make all of the NFL throws. At Notre Dame he routinely threw out patterns, come-backs and go routes with plenty of zip to get the ball past breaking defenders, or the right touch to get the ball over defenders. His arm strength compares favorably with Mark Sanchez, the 5th pick in 2009.

Clausen will thrive in Mike Shanahan's environment and Kyle Shanahan's offense. He will come in to compete for the starting job immediately and will lift the hopes of the Redskins passionate fan base.

Offensive tackle may be a greater need, but Shanahan knows that if you have the opportunity to take a great passer, you do it, because you do not know where you will be drafting next year, or if a similar or better QB will be available. I am sure that Shanahan does not expect to be picking in the top 5 of the draft again in 2011.

Jason Campbell may be packaged in a draft day trade so that the Skins can move up in the end of the first round to select an offensive tackle, or the Skins may pursue Jared gaither from the Ravens.

They will be looking at running back, more o-linemen, and some linebacker prospects later in the draft.