We're through the first five picks of the 2010 BTSC Community Mock Draft thanks to the timely selection made for the Kansas City Chiefs at #5 by il_steeler_fan. Good stuff by one of BTSC's longer tenured members. Next up? Another stalwart of the site, NYSteelerFan4, who is picking for the Seattle Seahawks at #6.

Quick note - due to the Donovan McNabb trade that went down this weekend, we allowed FattyBoombastic to re-do his pick at #4. He had previously selected Jimmy Clausen, QB, Notre Dame, but obviously would have chosen differently had he known of the trade prior to making his pick. So, with his re-do, he has chosen Trent Williams, OT, Oklahoma.

Seeing how the draft has played out, the Kansas City Chiefs back off of Tennessee safety Eric Berry and take advantage of one of the three best players in the draft falling to them. So with the 5th pick in the BTSC mock draft, the Kansas City Chiefs select Oklahma DT Gerald McCoy. GM Scott Pioli took DE Tyson Jackson last year in the first step of rebuilding the D-line, and McCoy's availability here is a huge break, that would surely have the Chiefs war room doing handstands. Berry could still be an option here, but with the kind of money this pick demands, McCoy is as safe a bet as there is in this draft. They can now address defensive backfield help in the later rounds. 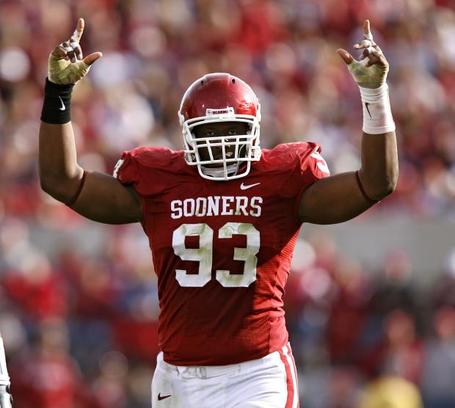